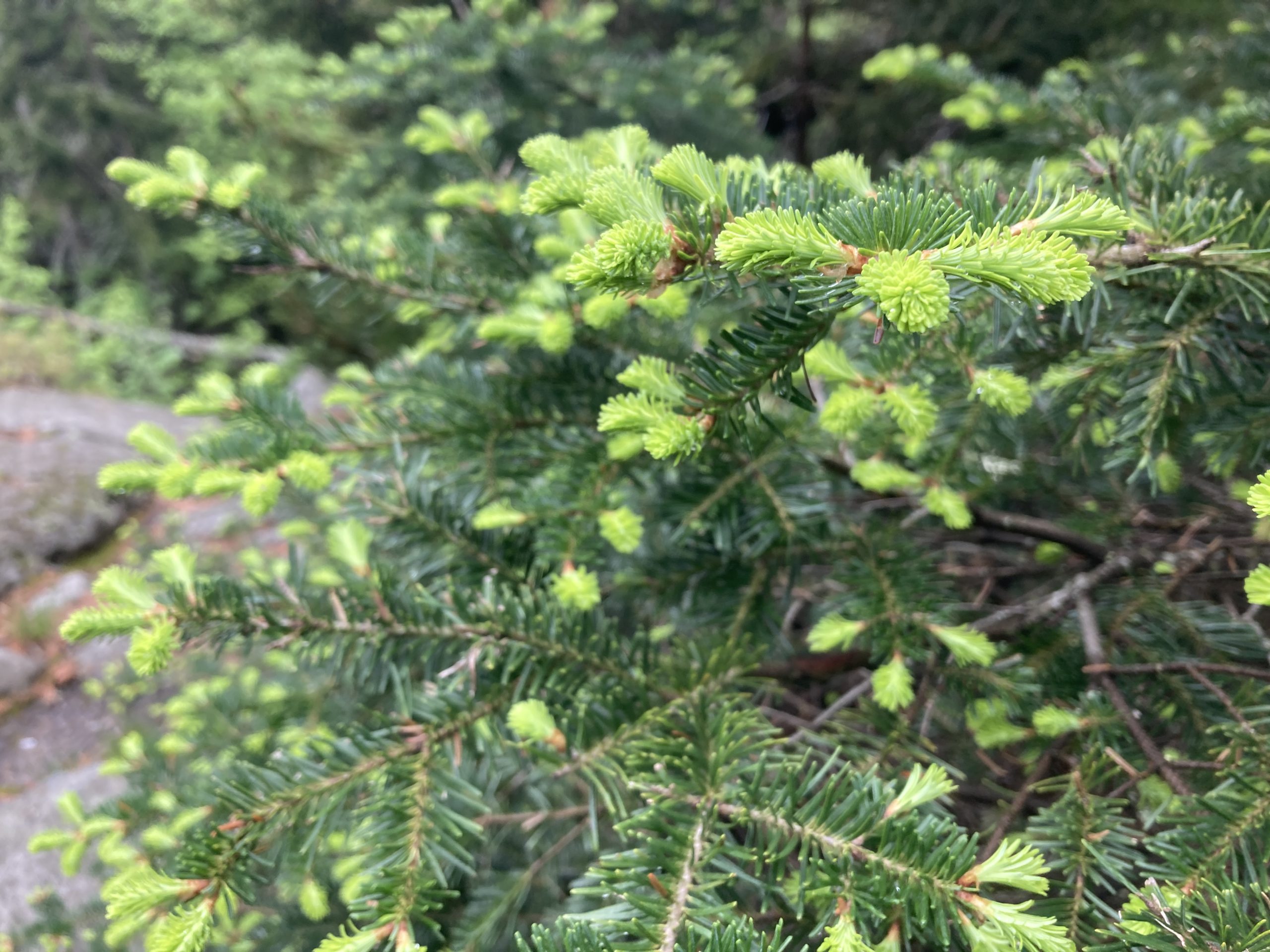 A day of flat walking, just what I needed. The fabled ease-up of Maine finally arrived today after spits and spurts of easier terrain teased me between small sub-ranges of tough mountains. Baldpate, Old Blue, Saddleback, Sugarloaf, Crocker. The Bigelow’s were the final obstacle between me and the trail of my dreams, and I finished up that rocky traverse this morning before plunging into the endless sea of ​​mud, ponds, and maple. It seems strange now, at the end of the long day, to think that just two weeks ago, I would have called a day like this one boring. The views were not grand, the hiking monotonous, yet after having my fill of the spectacular and challenging in New Hampshire and Southern Maine, it all felt right. Different, familiar, and right. My legs ache from the effort of distance, not of mountains climbed. My mind is tired from a day with nothing to do. My ankles itch with the memory of a dozen mosquito bites. I’m positive that I would lose my mind in this green tunnel if it continued for a month, but for one day, and probably a few more, it was just what I needed to help me remember my stride and turn inwards as the end of my AT approaches. The final week? One day at a time, please.

The muck splashed on my tent told me that I had slept through a lot of rain during the night. As I tried to wipe it clean while rolling it tight, my hands became covered in small bits of dirt and forest detritus, which I then smeared onto my shorts. It seemed that the forecast had been right about that much at least. However, contrary to the rest of it, the morning was bright, if not clear, and dry so far. I had expected to be packing up in the rain, so dirty hands were nothing to complain of.

I hiked out of camp and back to the trail across boulders slick with humidity. I actually would have preferred a little rain (just a little) to this sticky mugginess, but I didn’t dare say that out loud. The rain would come, I was sure, and it was likely to give me more than my fair share. The dense jungle of the deciduous forest gave way to the dense jungle of spruce and moss as I picked my way up roots and rocks to the ridge of Little Bigelow Mountain. By the time I realized that I missed my water source, it was too late to turn back, so I gulped a mouthful of what remained from last night, then hiked on, trying to breathe through my nose. There was nothing else to do. I poured sweat, as I seemed to do a lot these days, but finally caught a light breeze from a viewpoint near the low summit. The bigger Bigelow’s were capped in glowing cloud, as were Sugarloaf and Crocker across the valley. The sky was mostly filled with a varied cornucopia of gray shapes and hues, but a few bright patches had me hopeful that the rain would not be as continuous or violent as predicted. The birds in the vast forest below sang their little hearts out, and I smiled at the twittering cacophony. It sounded carefree and belligerent, like there was nothing more important in that moment than filling the world with music. Of course, the concert was not performed for my pleasure, and probably had some practical purpose driving it. Not that I would ever know.

I slipped and slid with alarming consistency down the other side of Little Bigelow on slanted slabs of seemingly textured stone. I couldn’t explain why today I had soap on my feet, but it was a theme that would continue. Not for the last time, I ended up on my butt, wondering how that step of all steps didn’t work out. More often, I stayed on my feet while a foot skated uncomfortably a few inches before catching on the next protuberance. The slips continued even after the trail flattened out in the lowland forest, but I was getting used to them at this point, trusting no step. I drank my fill at the next stream, then topped off my bottles again for the long, flat walk ahead.

The trail was smooth as it closely followed the shoreline of Flagstaff Lake, and I languished in the gorgeous breeze blowing off the water for as long as I could. It cooled my sweat and kept the bugs grounded. But then the trail turned east, up a hill just steep enough to have me sweating again in no time. The leaves were dense, and although I heard the wind in the treetops, the air was still and thick at my level. I breathed it in. I exhaled. Both in and out, it was hot and humid.

A slight down carried me to the bottom of another slight up. These gentle grades typically would not have registered as landmarks, but without views, they were how I gauged my progress north. I knew that this second hill was a little larger than the first, and that it would be pretty much downhill for the rest of the day after the top. And like the first, this hill was just steep enough to see me drenched in sweat and swarmed by mosquitoes anytime I slowed to dodge a mud pit or downed tree. When the sky darkened, I thought it might finally rain on me and release this sticky tension hanging in the air, but the gloom passed with nary a drop that hadn’t squeezed from one of my own pores.

There was a choppy wind swell crashing along the rocky shore of West Carry Pond. The water was flat gray to match the sky, yet it moved with a random energy that spoke joy to me. The breeze was a welcome relief as well. I stopped at the nearby shelter for lunch, and filled my belly with spicy chips, dried fruit, and trail mix. While I munched, the sky finally let loose, unleashing a terrific downpour without prelude. It thrummed on the corrugated roof and collected in milky puddles around the perimeter. I watched, happy as a clam, smug and thankful.

The diluted memory of the rain dampened my sleeves and legs as I pushed through the dense bushes and baby trees over to East Carry Pond. I was deep in the forest now. The flat trail and sucking mud were no longer novel. It was all I had ever known. I swatted my face automatically and kicked my ankles together if I felt the shadow of an insect. Then a flashing blur in the corner of my eye. A squawk and thumping wings. I thought that I had scared a grouse up into the trees, but this bird had a different look. I eyed it. It eyed me. Then it squawked some more and made another plunge at my head. I ducked out of instinct and couldn’t tell you if it were necessary or not, but this bird seemed out for blood. It dove at me again and again, fortunately always announcing each charge with another squawk. I must have been close to its nest or something. Each time I felt the woosh of the air as it passed, each time I was grateful to still have my eyes. I hiked as fast as I could with nervous looks over my shoulder. One last swoop, then quiet. Now that was crazy. Not so monotonous after all.

Every surface felt like wet soap as I slid down to Pierce Pond. There, I stood in the wind, relishing the respite from the mosquitoes and appreciating my vision. I then crossed the knee-deep outlet and followed the logically named Pierce Pond Stream through a narrow canyon as it tumbled and churned over numerous cascades and waterfalls. My legs ached in a way that they hadn’t in two weeks. This was the deep bone-ache of long miles, not the burning fatigue of steep up and down. I had almost forgotten this satisfied discomfort.

I stumped down to the shores of the wide and mighty Kennebec River. The clearing sky glowed with pink tufts of cotton candy cloud and the languid waters glittered with subtle texture. This marked the end of my day. Tomorrow morning I would catch the canoe ferry across to the other side, but there was no more moving north for me today. I pitched my tent and dove inside, leaving the mosquitoes to struggle against the mesh wall. I watched them as I ate my beans for dinner, no longer hating them. I was too tired to hate. Even this flat stuff was hard work.

This post was originally published on my blog hikefordays.com. Check it out for trip reports from my other hikes including the CDT and Sierra High Route.