In Theory, It’s Quite Easy

Before beginning this northbound jaunt I envisioned ample time for pursuits of the mind. After all, how many hours a day would I truly be hiking? Eight? Maybe nine if there was an easy downhill and I wanted to get close to town? Another eight hours of the day would be for sleeping, a generous four hours would be devoted to camp chores, cleaning, and commiserating with other hikers. This would leave three to four hours a day for pontificating, analyzing, brainstorming, reading, writing, and generally trying to embody a 2022 version of a semi-wilderness West Coast Walden in hopes that six months of selfishness can beget some sort of wisp of an idea that can coalesce into a longer text that can have some positive ripple effect – inspiration, dare to dream? – on some random individual. It wouldn’t be hard, right?

The Reality, However, Is Complex

I’m pretty sure Thoreau’s mother did his laundry and he had friends over, like, all the time. It was a bad goal from the jump. How do these YouTube people do it? They’re out here generating All-Powerful Content (CONTENT!)… But how? More importantly, WHEN? I wake up at ass o ‘clock to get some hiking done before the sun is high in the sky and my brisk walk melts into a trudge. I take a big old break in the middle of the day but mind is mushy and it’s hard enough to hold a coherent conversation, let alone string together sentences. When the sun is less aggressive I head out on what can only be described as A Race To The Finish! wherein I do math for the remaining miles: People passed over remaining campsites within a reasonable distance divided by energy remaining, with the constant variable of X, which stands for hikers ahead of me I have not yet encountered and who could thus be occupying a campsite . Phew!

And forget writing over coffee in the morning: Did you know that only I – yes, ME – can prevent forest fires? That’s what the threatening ursine signs say. Do you know what it’s like to hike with that weight on your shoulders? And in addition to the damn pack! Loaded with water and the fear of burning down the Pacific Crest Trail and surrounding National Forests. And everyone is so cavalier about their flames! Throwing that stove up in the middle of tumbleweed and chaparral as though being a prospective thru-hikers is a flame retardant. You cannot possibly expect me to light my stove in the wee hours of dawn, blurry-eyed and puffy-faced, with the knowledge that I could burn the woods down for a Nescafé. Madonna mia! I pour instant coffee and a Breakfast Essential into a plastic bottle, fill it with cold water, shake shake shake that sucker and chug it while I walk.

But I had a goal, dammit! I wanted to write about hiking, not simply hike. Is this why people hike with ukeleles and pinwheels and dogs? Ugh. Anyway! Here’s what’s been happening:

From Hangtag to Hauser

I woke up with the sun at the CLEEF campsite and saw that most of the campers had already left in a pre-dawn blitz, frenzied to get to Canada on Day One. With a later season start there’s an undercurrent of pressure, to be sure, but I didn’t feel like rushing out on the first morning. The campsite was in a valley, surrounded by brown hills with green shrubs, the chaparral that would become familiar quite quickly. A few people were van camping in the distance. There was a rodeo ring with bleachers, bathrooms, a dirt road, a few parked pickups.

I packed up and wandered over to the picnic tables to have coffee. There was a scale: My full pack with five liters of liquid (H2O and Gatorade) and four days of food weighed in at 36.5 pounds. This was demoralizing, to say the least. I consoled myself with the fact that there wasn’t too much elevation gain in the first week.

I walked the half mile south to the border monument, where there was a small group of thru-hiker hopefuls already gathered. I stepped into the circle and tried to concentrate on the Leave No Trace talk given by a kind man from the PCTA. I was distracted by the wretched wall separating the US and Mexico. I knew the trail started at the border, of course, but all the images I’d seen of gleaming grinning hikers perched atop the monument, conquering face strong, had apparently been taken at an angle that omitted the towering barricade. 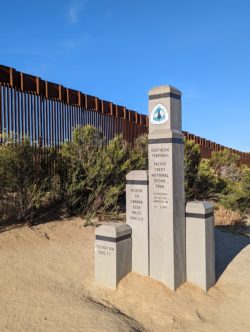 I’m hiking, clearly, so there’s a significant part of me that finds the endeavor important enough and justifiable enough to spend half a year doing it. However, I wish more hikers would acknowledge the stark contrast of how different groups of individuals are treated by the same people in the same area. Helicopters fly constantly overhead in this area, using advanced technology to zero in on and apprehend individuals who are fleeing challenging societal conditions in search of a better life; volunteers who try to provide aid to these humans are fined and detained themselves. Meanwhile, the majority-white contingent of non-working walkers making our way up the trail are the recipients of water caches, snacks, and a hero’s welcome in every town. It’s fucked up, honestly, especially writing this in retrospect and having listened to hikers complain about lack of water caches and coolers that “only” have water. WHAT? I’m not aiming to dissect the entitlement of the bizarre sub-category of pseudo-athletes to which I begrudgingly belong-YET! For now, let’s start this hike.

A Walk in the Desert

After all of the buildup and planning and traveling and pondering and gear-selecting and food-choosing it was a relief to just start walking. The first few steps with the water-laden pack were rough, to be sure: Could I possibly make it a mile, let alone hundreds and hundreds? Labored breathing, instant sweat. I chatted with a few hikers as the sandy trail wound through desert scrub, greens and browns. I hoisted the bulk of the pack, adjusted the straps, remembered the feeling of the pack against my body.

Somehow the miles passed. Muscle memory of legs churning forward, pushing off on a different type of trail than I’m used to, no wet dirt to secure my footsteps, no threat of rain, no thick wet air. The sun was shining strong before nine but the elevation profile was merciful and excitement was high so I didn’t notice too much. The trail climbed, sandy and full of wildflowers, green hills in the distance, the border wall growing smaller as I moved slowly north. 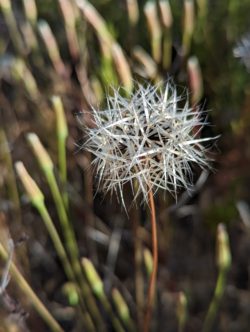 As the day continued, I ended up hiking with a friend duo and so the miles unfolded in a haze of heat and the stunted “get-to-know-you” questions that define the initial days of a new life. Everyone is very young. I realized that the May start date coincides perfectly with college graduations and thus with a horde of people with a desperate need to Get To Know You and Have A Meaningful Interaction and I feel overwhelmingly fatigued. After thirty-five years of existence I no longer care where I’m from. I certainly don’t care where anyone else is from. None of that means anything. I’m not earnest and bright-eyed.

Despite the sun’s force it wasn’t too hot out – barely in the seventies – so there was no need for a long midday break. I reached Hauser Creek around 14:15; I decided to camp. I had a trashy romance novel to read (and hopefully abandon, completed, in a Lake Morena hiker box), a journal to write in, and plenty of water. I set up my tent. I felt content – this is why I’m out here! Hikers streamed by, forging on, continuing the uphill climb to Lake Morena where there was beer and food and a campground. I felt slow – I debated packing up and doing a few more miles. It would have been purely ego-driven and so I decided to stay.