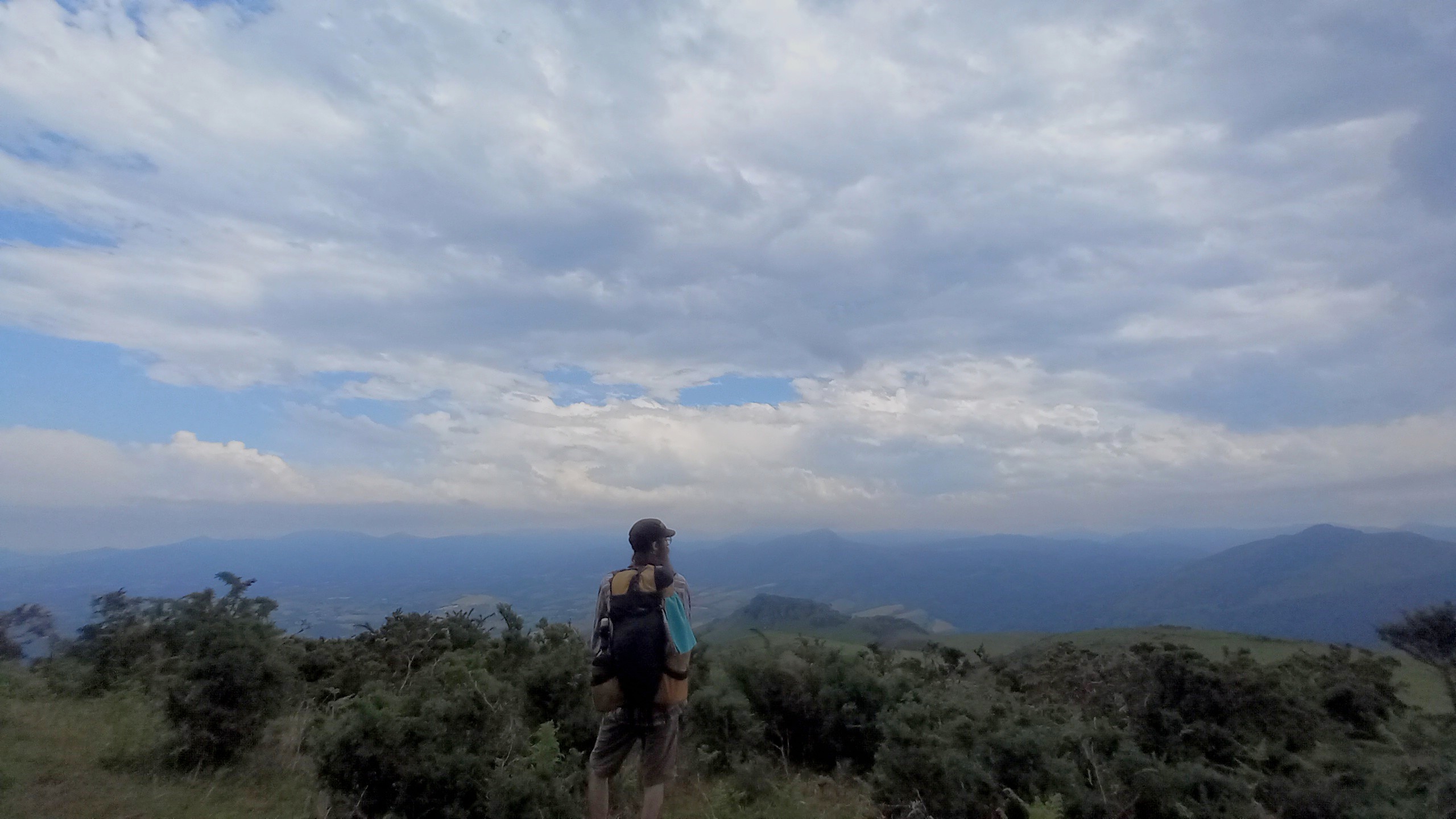 Well, alright, I’m finally on trail! Not that I haven’t been on trail, but now I’m officially on one of my two planned European “long trails” for this summer. Neither trail will be long like The Big Three in the USofA, but both will be 40+ day thruhikes from end to end.

I’m mostly following the Cicerone Guides’ day to day plan for the Pyrenees High Route (HRP will be how I will most commonly refer to it from here on). These guides are easy to come by and the one for the HRP comes with a free download of the .gpx files which I will use in the Gaia GPS app. I may purchase high quality paper maps of the parks later, but we’ll cross that bridge when we get to it. For now the Gaia app is working great.

So where to begin? At the beginning of course. But first we have to get there. 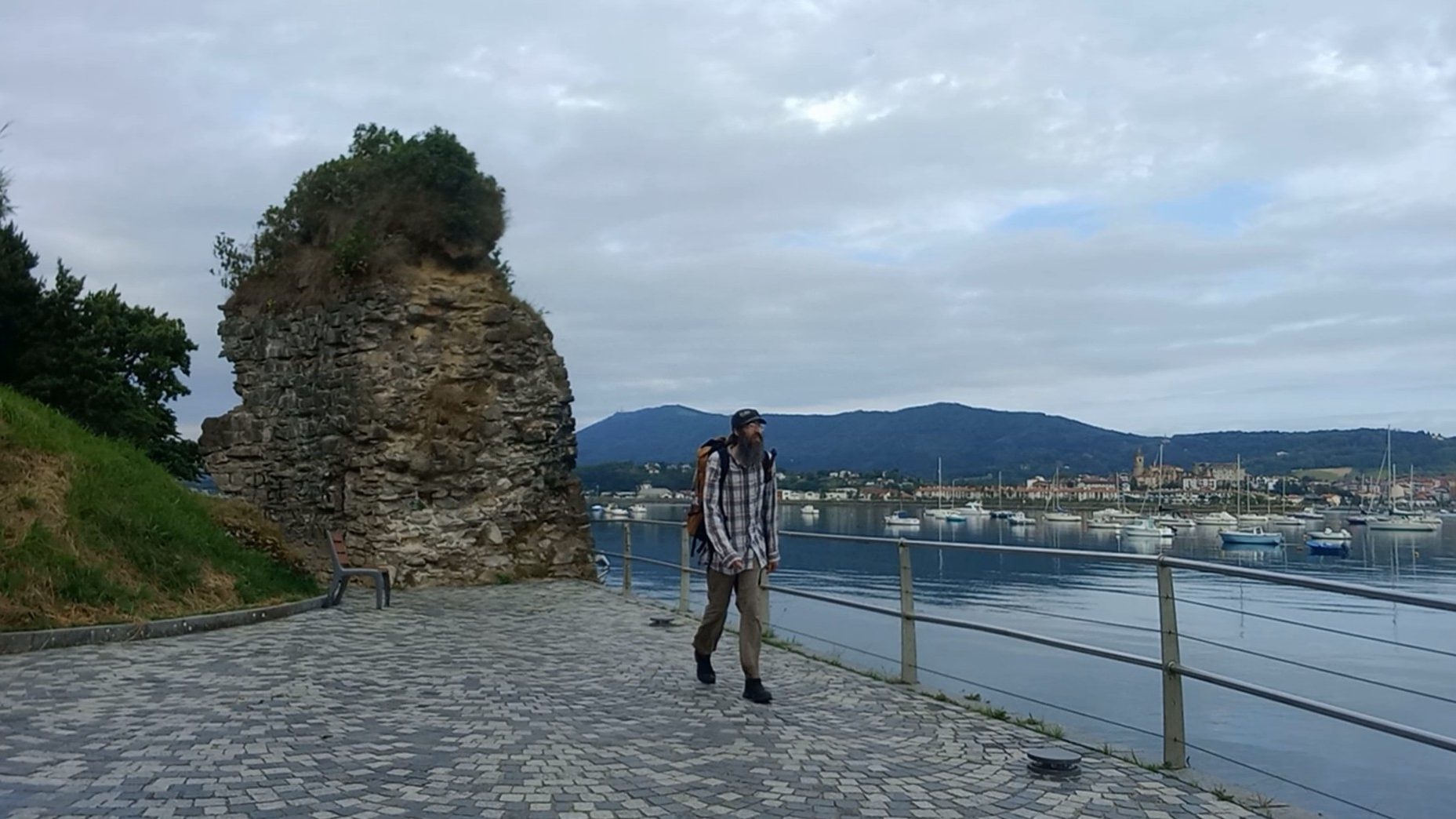 Day One – Irun to Hendaye to Col de Lizuniaga

The day started when I got booted out of the donativo Pilgrim’s Albergue I stayed at in Irun right at their closing time of 8am (had to get as much of that complementary wifi and coffee as possible, like a thruhiker does). I had four bonus miles to trek to get to the official starting point, an enjoyable start mostly walking the beach boardwalk after cruising through Irun city center and crossing the French border Bridge.

When I got to the beach on the Atlantic side of Hendaye I threw down my pack, stripped to just my shorts, remembered to empty my pockets, and went for the obligatory starting swim. I couldn’t get a picture for my terminus start photo while in the water as a solo hiker, so this is the best I could do: 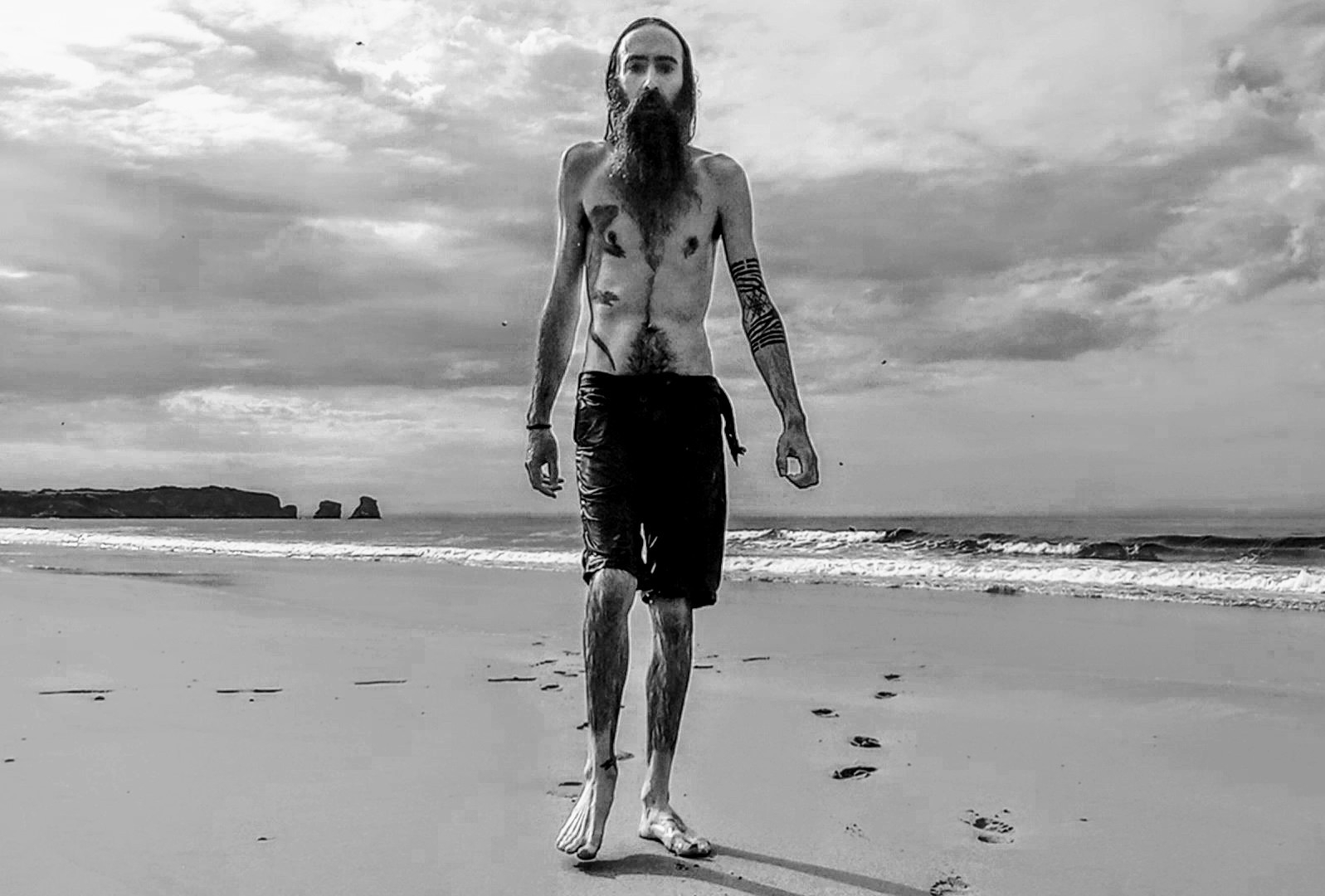 After emerging from the water and doing a brief pat down dry I hefted on my pack and walked barefoot for a quarter mile while my feet dried and the sand fell off (no worse way to start a hike than with wet feet and sandy socks!)

The trail led out of town rather abruptly and began to climb, following the GR10. The first hiker I encountered happened to be from Brooklyn and we struck up a really great conversation about visiting European family (mine French, hers Spanish) and politics and mostly about environmental activism. Her name is Susan Goodyear, she’s a writer and has a podcast called The War On Cars (!!!!) 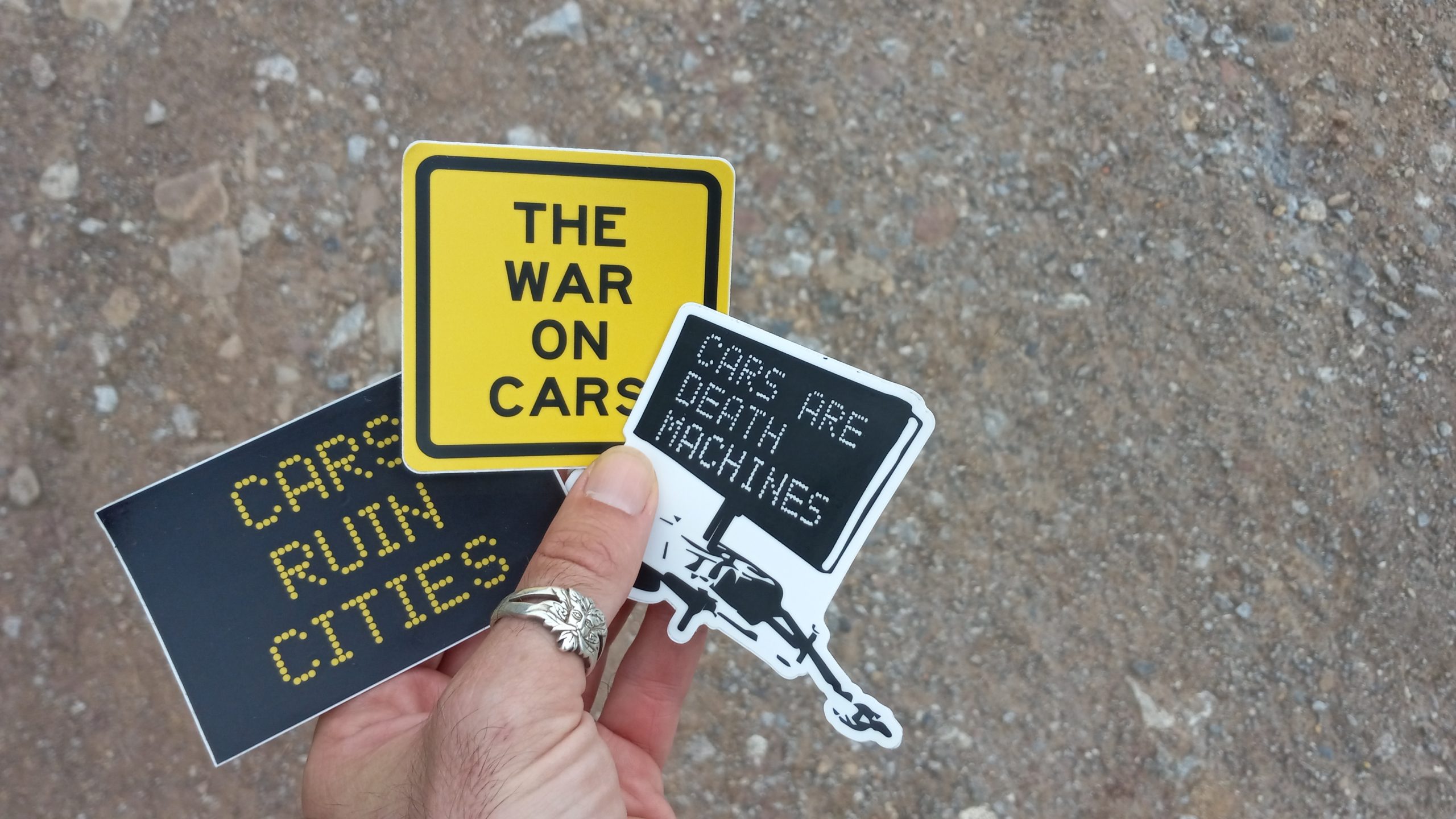 Right up my alley, to be honest. Those miles passed very quickly and as the first big climb began she stopped for a water break and gave me some stickers as we said our farewells.

The HRP split off from the GR10 for a mile or two, weaving along the side of Choldokogagna with soaring views back to the Atlantic coast, before rejoining on the other side of the peak. 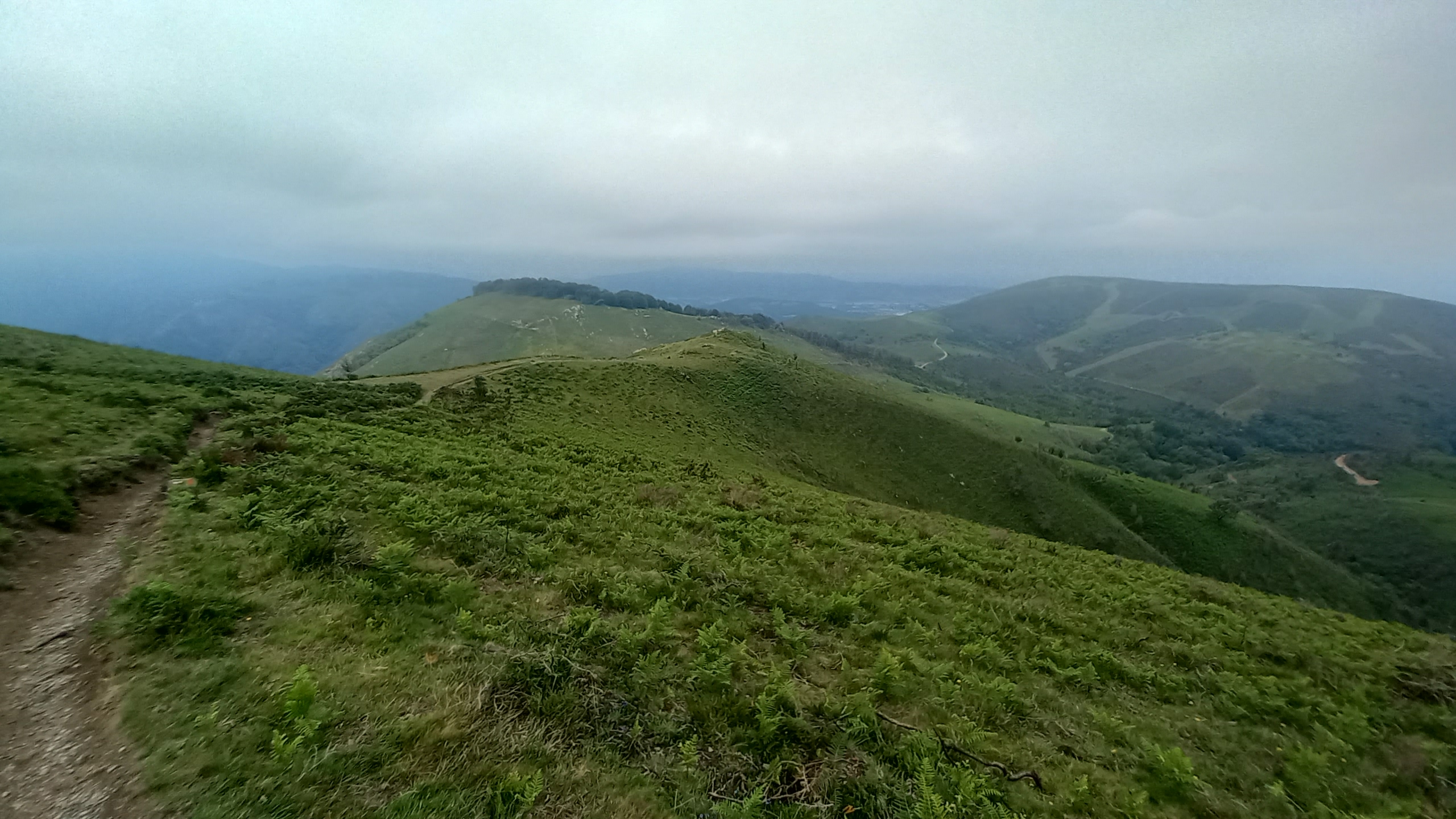 Single track followed the ridge for a good ways and after passing another peak (Mandale) dropped to a stretch of tarmac through a tourist paradise of bars and booze merchants, supermarkets and souvenir shops. All of this near a mountain top with no town to speak of, just some quality views. As is so often the case these days two miles from the main road everyone disappeared.

The HPR split from the GR10 for the forseable future and began what would be the most intense ascent I’ve done in a long time. This was mostly along a gravel road and went 2,000ft up over about 2.5miles. 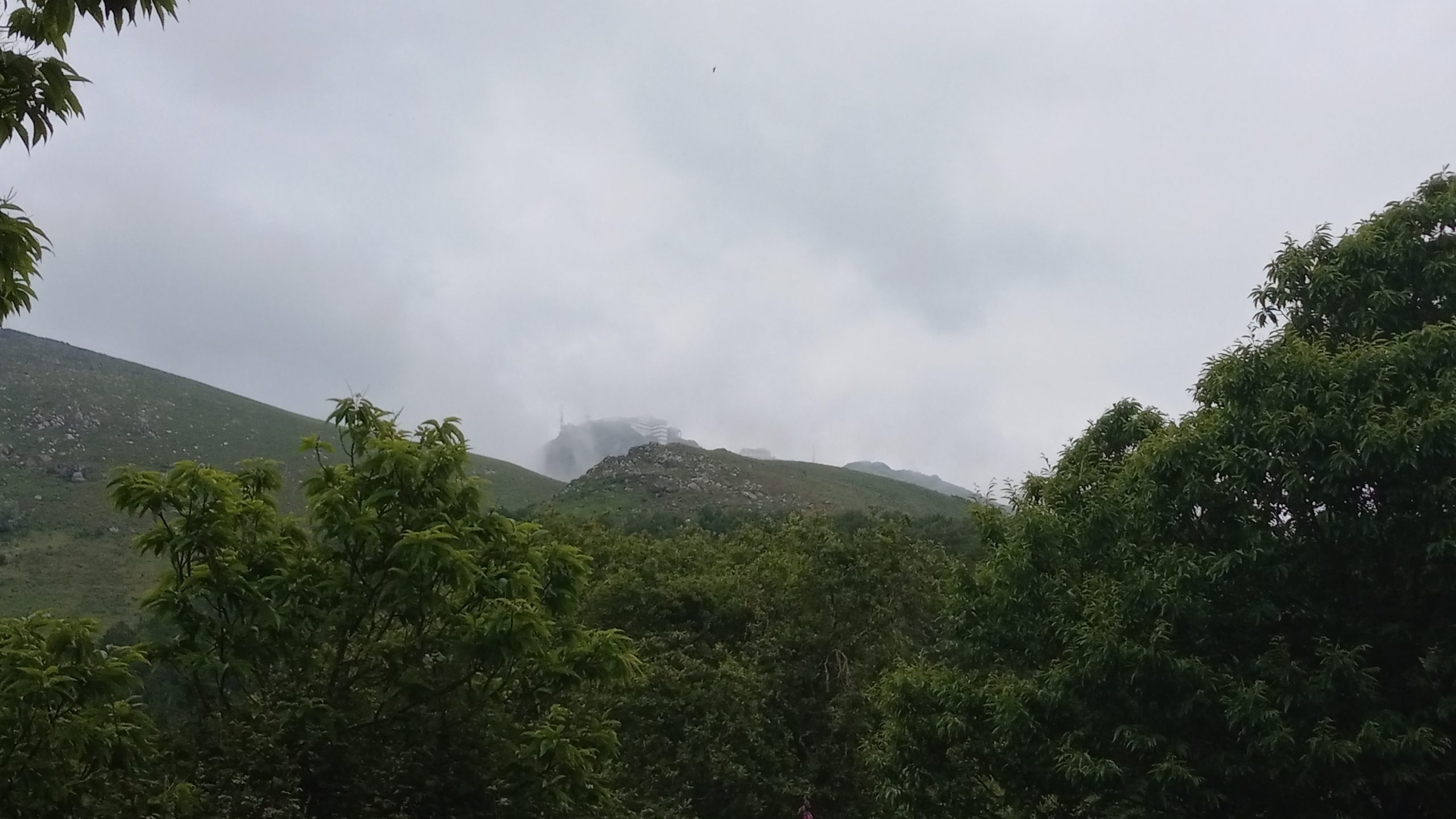 I know it’s hard to see but there’s a radio tower and a couple buildings way up in the mist there. Here’s the final ascent: 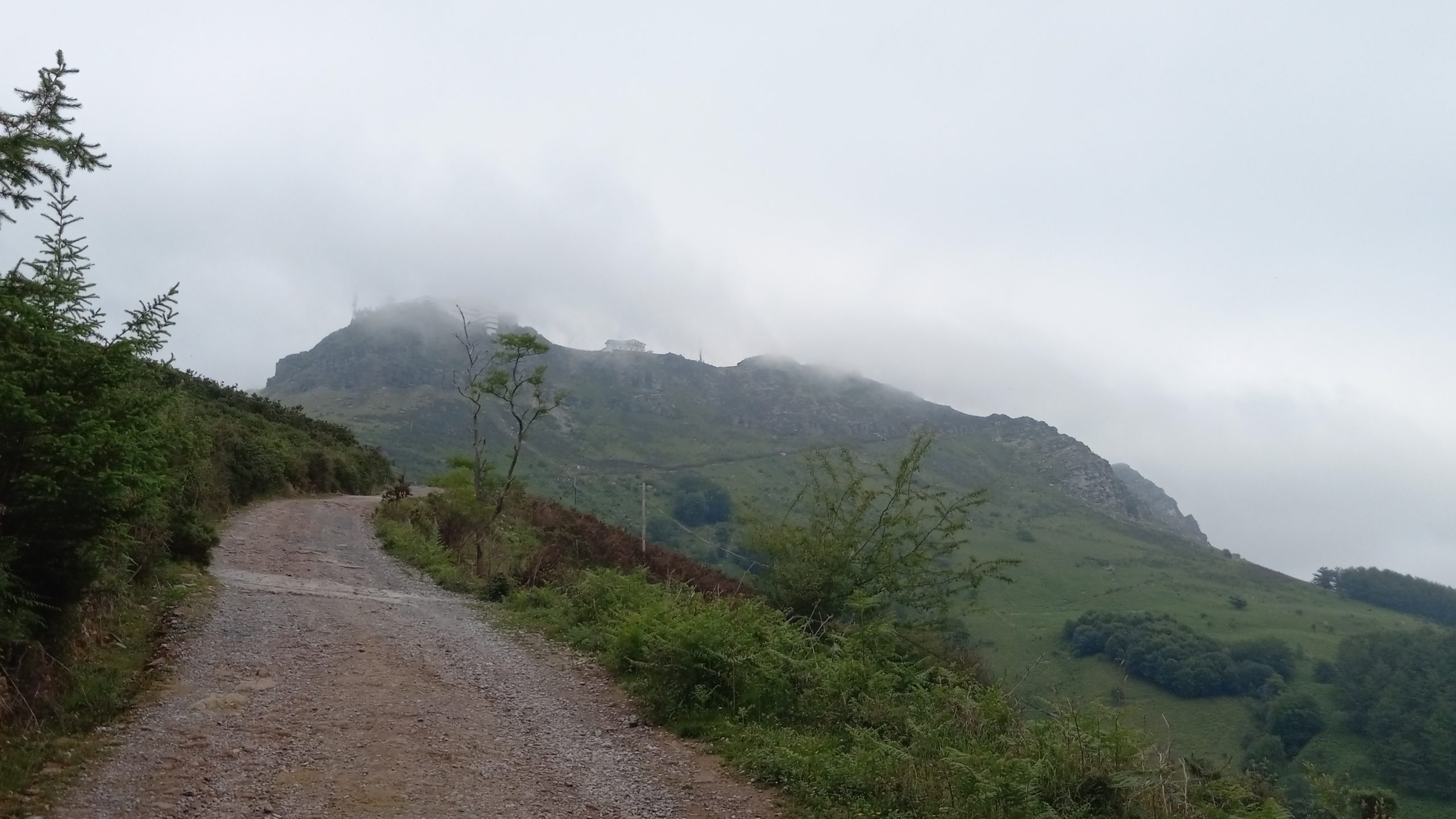 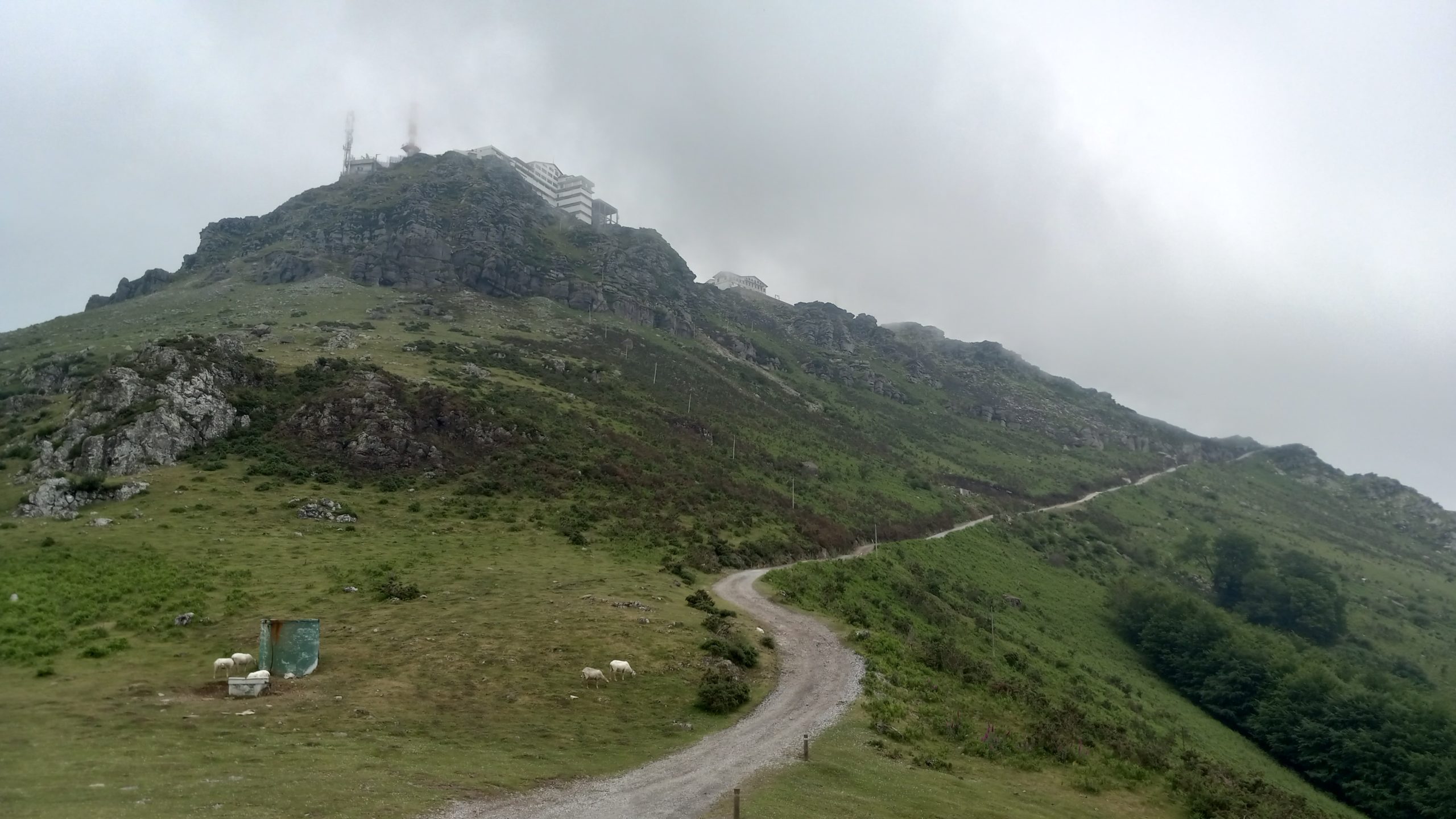 The top of the mountain (La Rhune) was socked in but I found a bar that was open, sort of. I think the barkeep was just serving a couple of his friends or other employees up there, but he sold me a beer all the same. He also told me that storm was coming and it would be a good idea to get off the mountain quickly, so I chugged and started the downhill jog.

Navigation was a little foggy but it didn’t take long to get below the cloud again. The views opened up and I couldn’t help exclaiming at the top of my lungs “WOAH! THIS IS AWESOME! ” 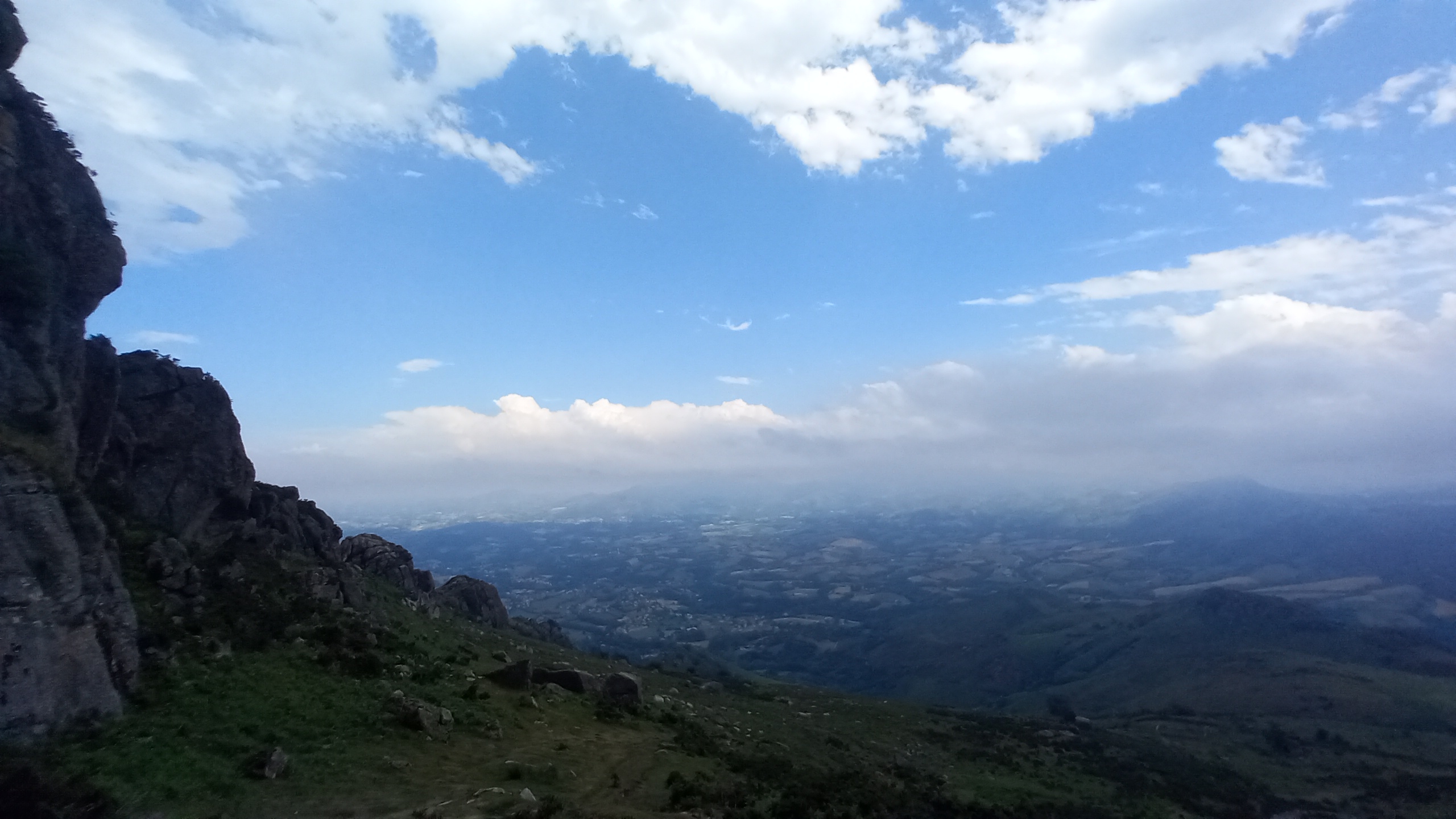 The trail descended steeply for a mile or two and at the bottom was my refuge, a closed bar/hotel that lets HRP hikers camp on their lawn for free, with potable spring water just 50ft down the road.

The sky boomed a bit but the bulk of the storm ended up missing La Rhune and it totally cleared up for a couple hours, but it probably wouldn’t have if I’d stayed up there, right? 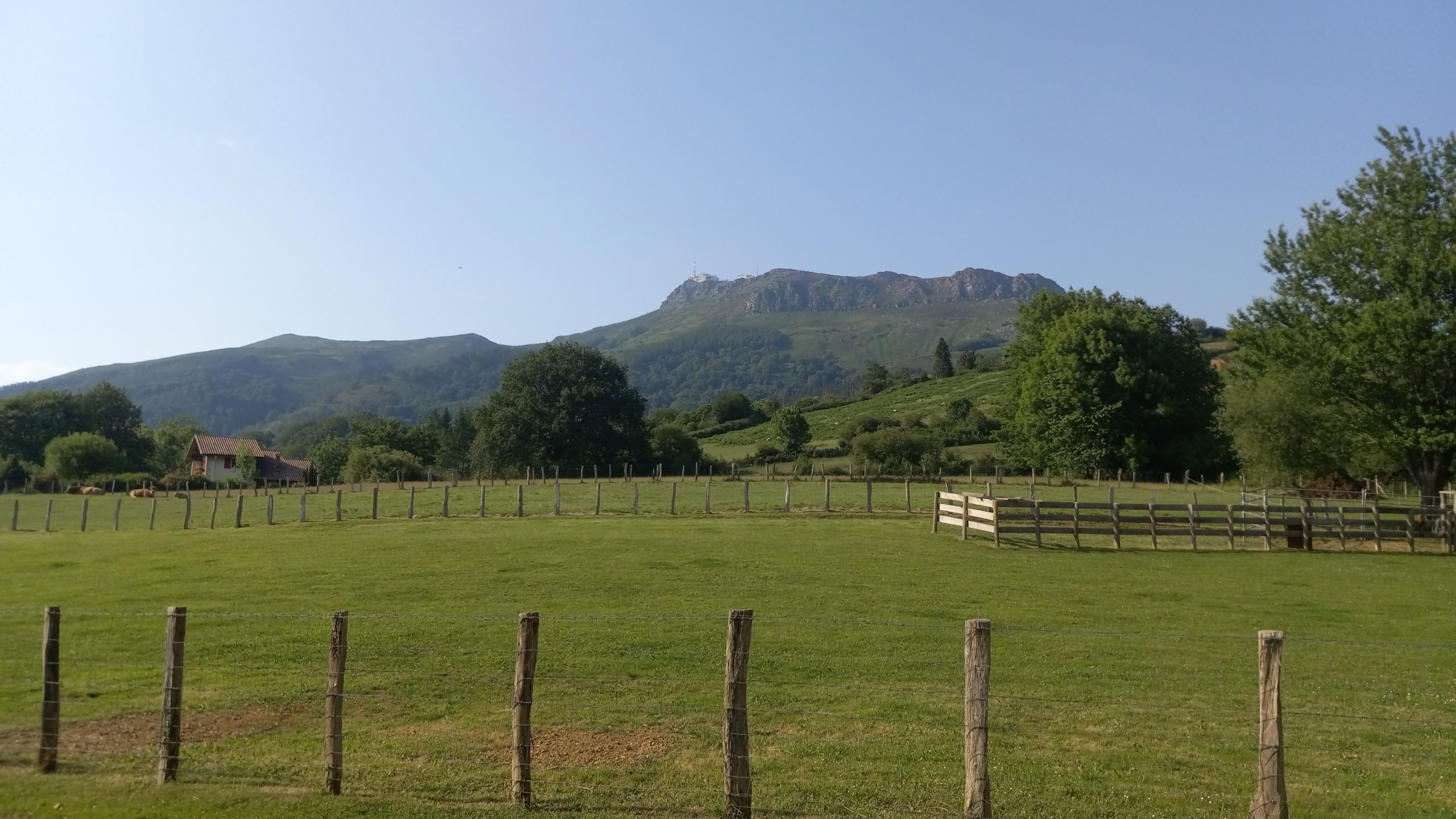 It did end up raining overnight. I woke to the pitter-patter of drops on my tent. When I emerged I discovered that they were mostly coming from the tree I had set up under and it was actually just warm and extra misty.

I packed up andwbegan a gentle ascent up the gravel road, enjoying the fog rolling through the green landscape. 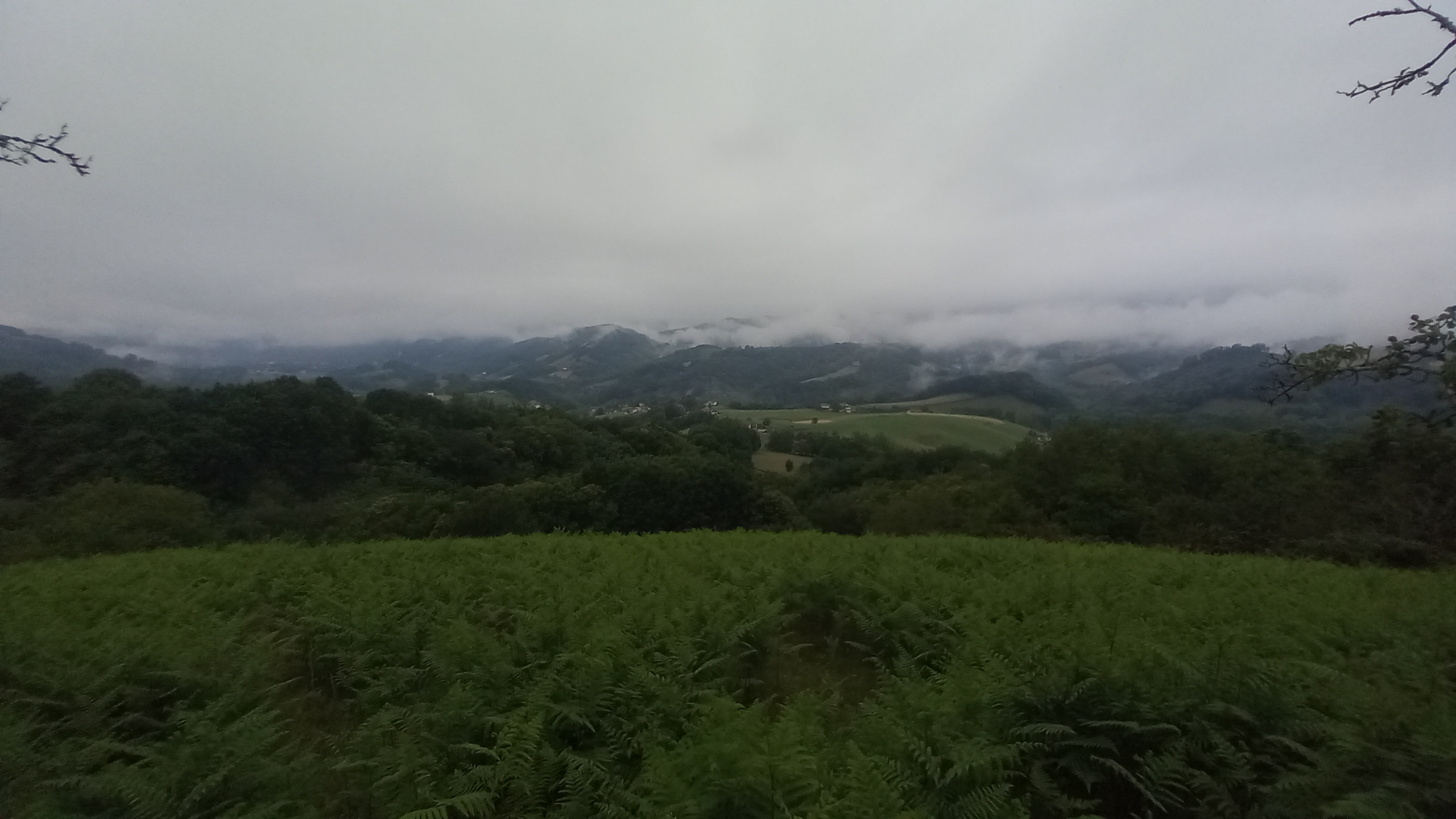 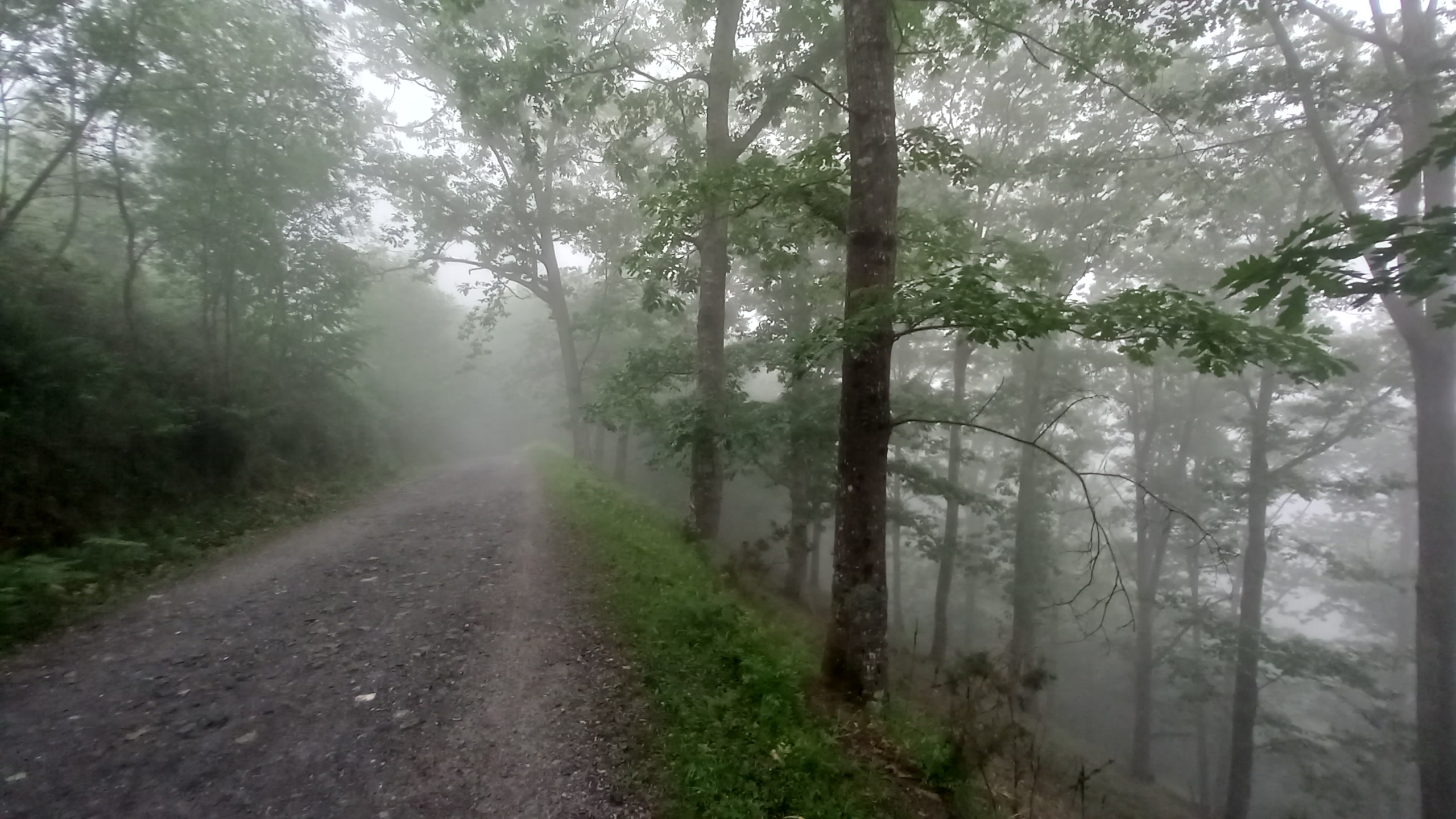 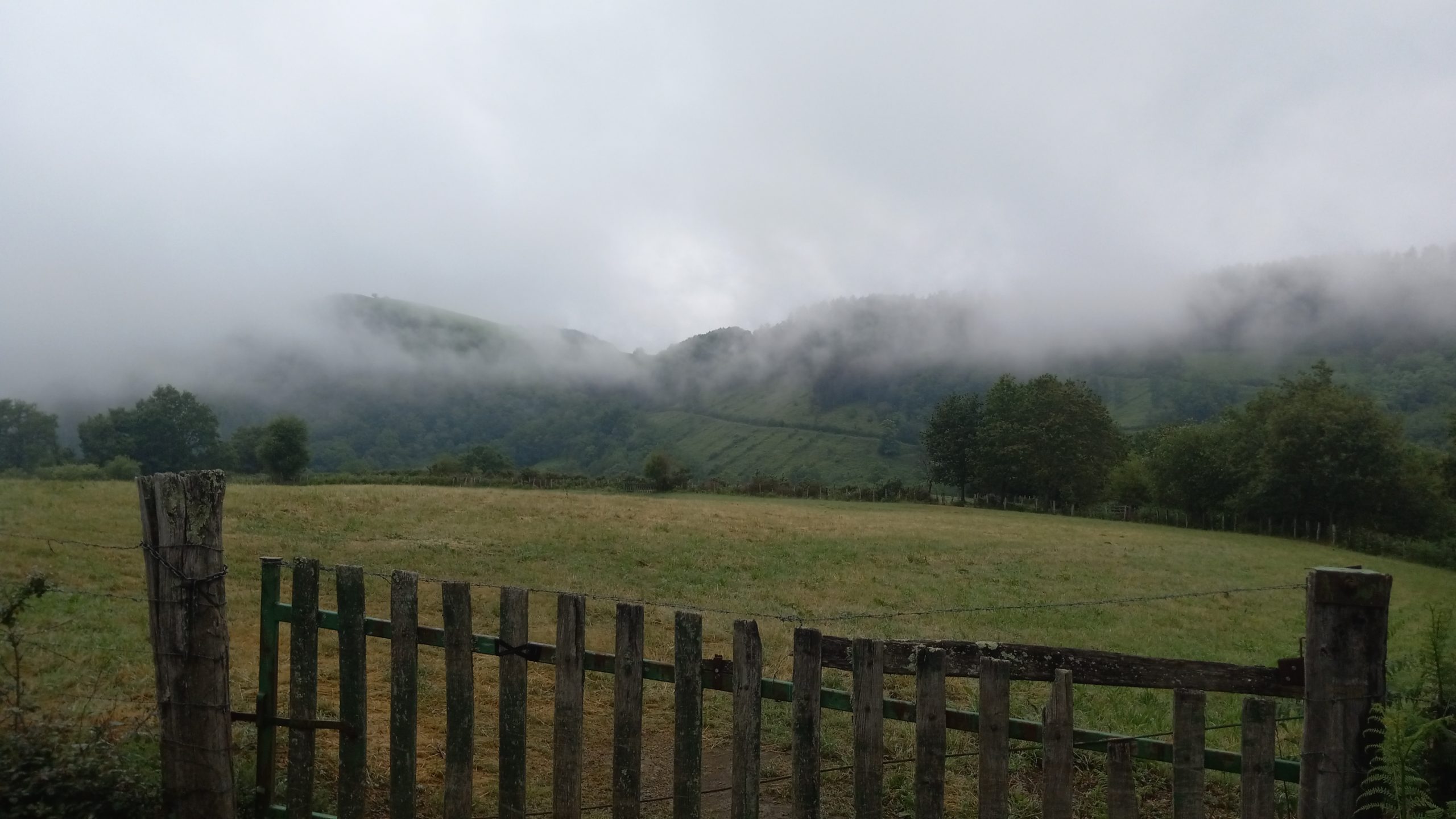 A bit before nine I passed a local man who pointed ahead and said, “café, abierto a nueve” to which I replied, “muchos gracias!” and after a short while found an “overlook” (white cloud where there should be mountains and valleys) with a bar/hotel, a café, and a pit toilet (!!!)

I used the facilities while waiting and when the café opened had some coffee and a croissant. Everyone else was having port, and maybe that’s what I should have done but it seemed a little early.

The trail pushed on along a gravel road, joining the GR11. I passed a guard tower and a bunch of tall hunting hides (for birds, I guess?) But then got lost in thought until I came to an intersection with an information plaquard about a short loop with dolmen and menhirs and stone circles and burial mounds . My family has long been into searching out these kinds of things while in Europe!

After correlating on my maps I realized I had passed it but decided to backtrack anyway, adding at least a mile if not two to the day’s hike. While the ancient structures were monumentally underwhelming, I’m still glad I went back because I met two hikers (Marc aka Bird aka Dreadlock Knight from Catalonia and Eduard from Belgium who had met three years prior on The Camino) doing the GR11. I walked with them for most of the rest of the day.

After good conversation and a final big climb our paths diverged and I descended solo from the clouds. On my way down I passed a farm house ruin among a grove of immense and ancient beech trees: 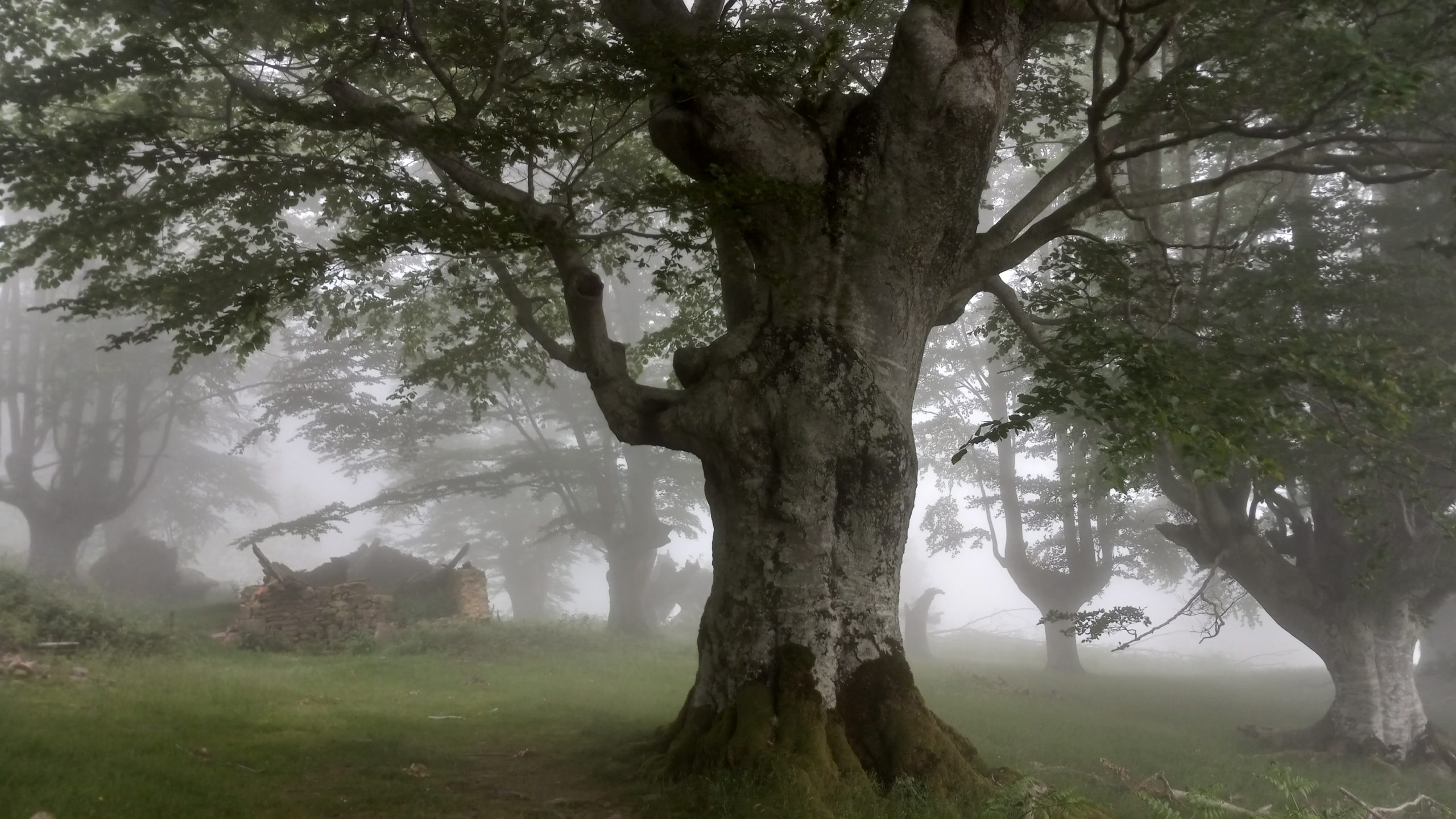 Tempted to stay, I felt the call of food and lodging in the valley below and continued on. The single track turned to worn dirt track then to gravel road on to concrete slab and finally to tarmac. I passed through several Basque hamlets in quick succession before arriving in Arizkun around 6pm.

I found my lodging through dodgy communications with the geriatric locals gathered at the bar and set up in Gontxea Hostle just next to the cathedral? chapel? (not quite sure of the difference anymore) in the center of town. 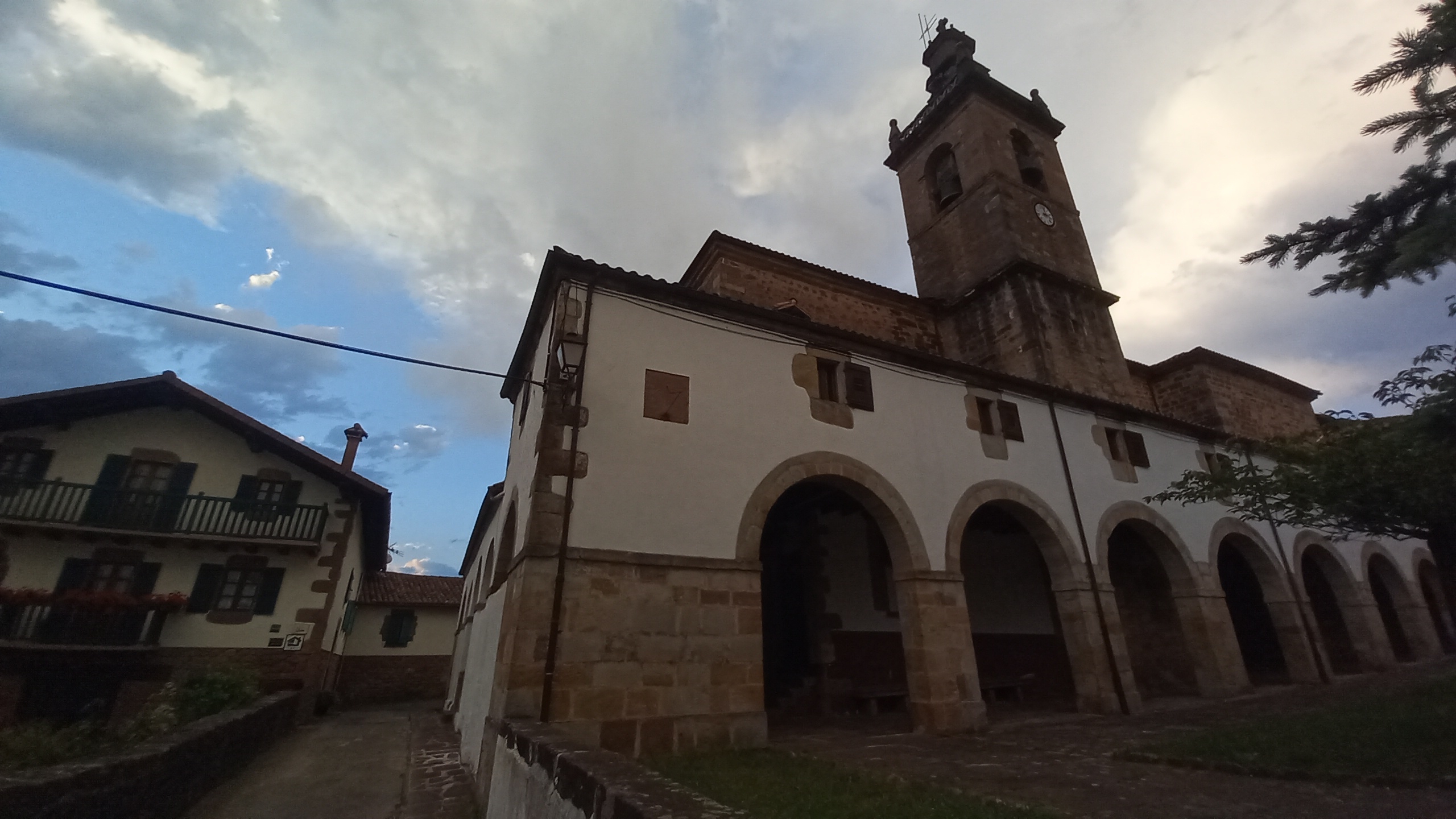 For a mostly “Bob Ross Day” (paint your own picture) the immersion in the clouds, the cool mist, the rolling fog all lended a mystical quality to this enchanting landacape. It’s just how Basque country is a lot of the time and it felt timeless.