“Have you heard about that hiking lady you like so much walking through Burnsville? ” My parents are not connected to the hiking community at all, so receiving the vague text above from my mom was strange, to say the least. Mom followed the text with a picture of their local newspaper, the Yancey Common Times Journal, featuring the headline, “Appalachian High Route: a hiking trail is born.” My parents had just discovered a new long-distance hiking trail right in our backyard. 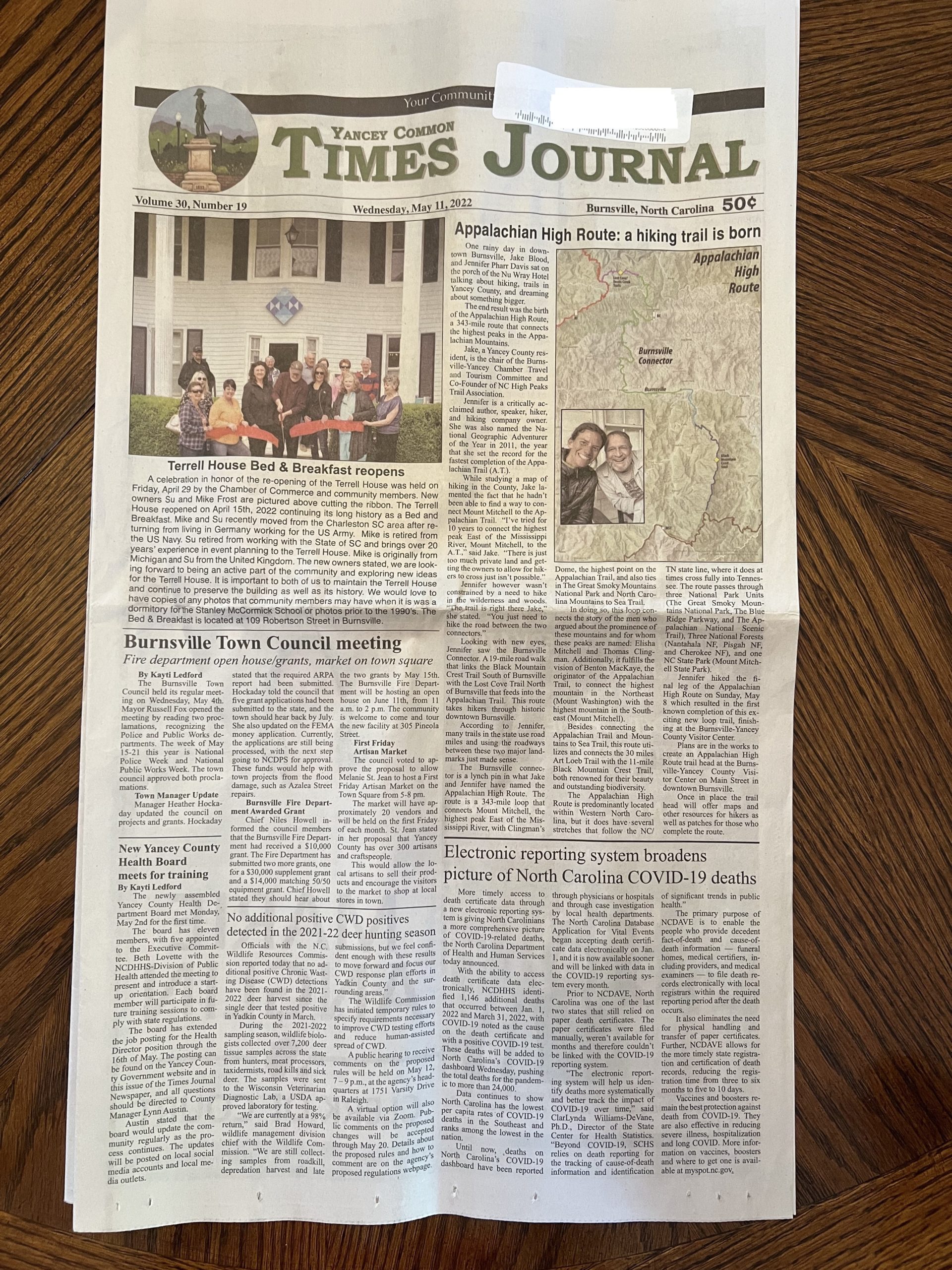 The “hiking lady” my mom was referencing was none other than Jennifer Pharr Davis. Pharr Davis is a legend among hikers, and I’ve admired her for years. My first glimpse into the world of thru-hiking came from the pages of her Appalachian Trail memoir, Becoming Odyssa. This book chronicles Pharr Davis’s first thru-hike of the AT through a coming-of-age story that took place on the author’s journey north.

Since her debut book, Pharr Davis has become one of the biggest names in the trail community. She set the Fastest Known Time (FKT) for the AT in 2011 when she finished the then-2,185-mile trail in 46 days. She also runs a successful guide service/outfitter in Asheville, NC named Blue Ridge Hiking Company.

Somehow, between parenting, running a business, traveling to speaking events, and writing, Pharr Davis found the time to piece together a new hiking route in North Carolina and Tennessee. With her friend and fellow trail enthusiast Jake Blood, the two dreamed up the ~ 350-mile Appalachian High Route.

I’ve heard about peak baggers scaling 14ers out west and 4,000-footers in New England, but I never dreamed they could do it in the southeast. The Appalachian mountain chain is among the oldest in the world, and over time these mountains have been whittled away to their current, relatively modest height. Yet 53 of the 54 tallest peaks in the east are in the southern Appalachians. Rightly named the Southern Sixers, they range in height from 6,684 ‘to 6,003’.

If you look at a map of western North Carolina and eastern Tennessee, it’s obvious how many incredible trails exist in this area. The Appalachian Trail follows the state line for several hundred miles, and the Mountains to Sea Trail (MST) dances along the border as well. The shorter and lesser-known Black Mountain Crest Trail traverses the Black Mountain range, which boasts “17 named peaks over 6,000-feet, including the highest peak in the Appalachians, Mount Mitchell at 6,684-feet,” according to Blood.

It was while examining these trail maps that Pharr Davis and Blood first came up with the idea of ​​the Burnsville Connector and later the Appalachian High Route. 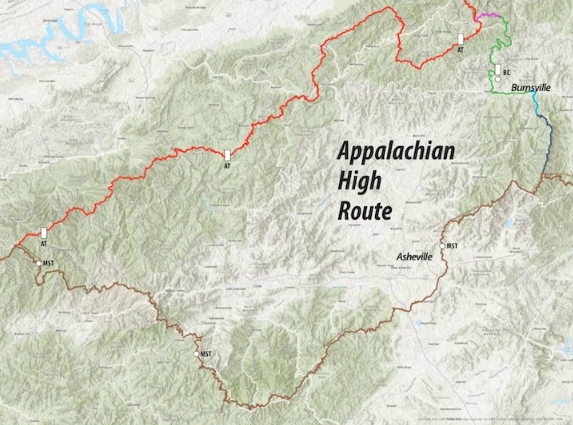 This trail seems to have it all, from history to elevation. Blood said that “while maintaining and hiking the AT, I learned that when Benton MacKaye originally envisioned the Appalachian Trail, he proposed it should run from the highest peak in the Appalachians, Mount Mitchell, to the highest peak in the Northeast, Mount Washington… I’ve been looking for a way to connect Mount Mitchell with the AT, but was thwarted by an overwhelming amount of privately owned land. I never considered using roads, until Jennifer and I started talking! ”

This trail officially begins and ends in the town of Burnsville, NC. According to Pharr Davis, “Burnsville is making a big to-do about the trail with patches, certificates, and (potentially) a downtown mural. Plus there’s a brewery (Homeplace Brewing) right by the town square/finish that’s run by a thru hiker. So it’s a pretty great post-trail celebration spot. ”

With deep roots in Burnsville, I can confirm that this town is as quaint and hiker friendly as it sounds. There is a long history of trail supporters in this area, including the Carolina Mountain Club and NC High Peak Association. 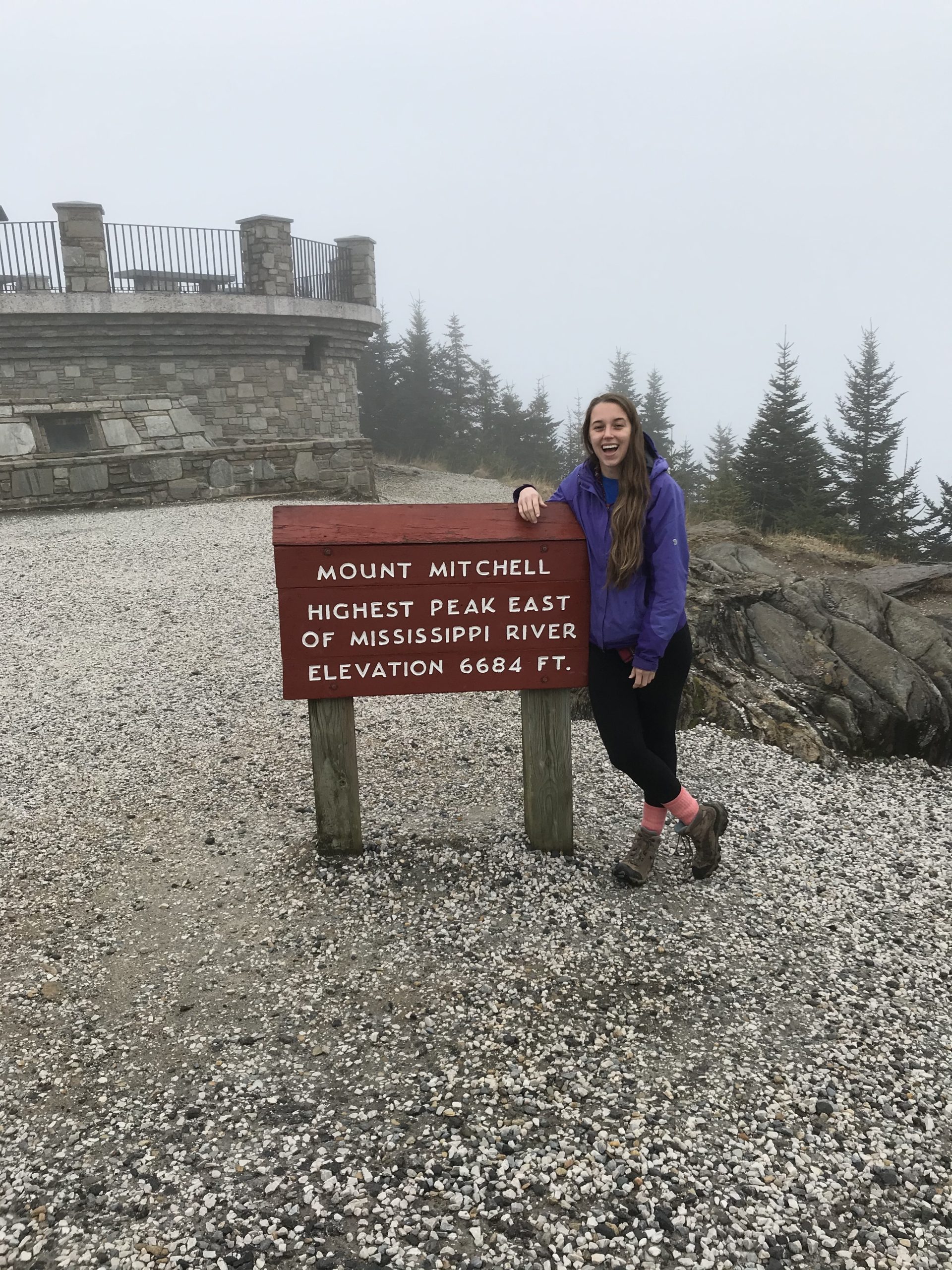 Rough breakdown of the route from the downtown Burnsville, NC:

Mountains to Sea Trail: ~ 155 miles on the MST heading west from Mount Mitchell to Clingmans Dome

READ NEXT – An Overview of North Carolina’s 1,150 Mile Mountains to Sea Trail 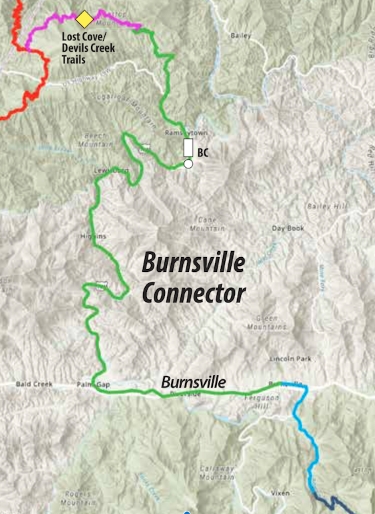 So what do 350 miles of “new” trail look like? The Appalachian High Route is unique because a majority of the route follows preexisting trails. Pharr Davis says the new route is “a highlight reel of some of my favorite stretches of the AT and MST. It’s similar in distance to the Pinhoti and Benton MacKaye, but it’s a higher elevation trail with peak bagging access and great trail towns. Loops also tend to be easier logistically. ”

Pharr Davis and her friend Haley were the first official finishers of the Appalachian High Route. Pharr Davis said that “to create/complete the loop, I hiked the Burnsville connector in 3 days – taking my time and doing route recon. I had already completed the other miles. ”

According to Pharr Davis, some of the highlights include “the Smokies, Black Balsam, Max Patch, the Crest Trail and hiking through Burnsville was a very cool change of pace with lots of history.” 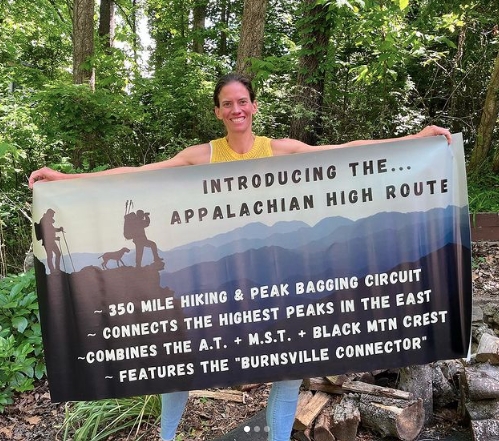 Is A Thru-Hike of the Appalachian High Route Possible?

Is a thru-hike possible? “It’s a great loop for a thru, but also a wonderful trail to section and/or use for peak bagging adventures. We’d love to section hike it and touch the high points with our kids over the next few years. ”

What would the mileage per day look like? “At 15 miles a day you’re looking at 3.5 weeks. If you want to touch all the high points near/close to the trail then it will add more time. ”

Are there opportunities for resupply? “There are four great resupply options right on the route: Qualla Boundary of the Eastern Band of Cherokee, Hot Springs, Burnsville, and Asheville.”

What do camping options look like? “Camping is toughest along the MST section, but if you can plan your overnight spots for portions of the route that leave Blue Ridge Parkway and cross into Nantahala and Pisgah National Forests – plus maybe a few private campgrounds in that section, it’s definitely doable. ”

Hikers on the Appalachian High Route could summit all 53 of the Southern Sixers with a little bushwhacking and creativity. In doing so, they would bag all but one of the east coast’s 6,000 ‘+ peaks — New Hampshire’s Mount Washington. “Cold Mountain and LeConte are both a half-day side trip off the route. And while most other peaks are on or in close proximity to the trail, there are bushwhacks to reach some of those summits that will also add time, ”says Pharr Davis. 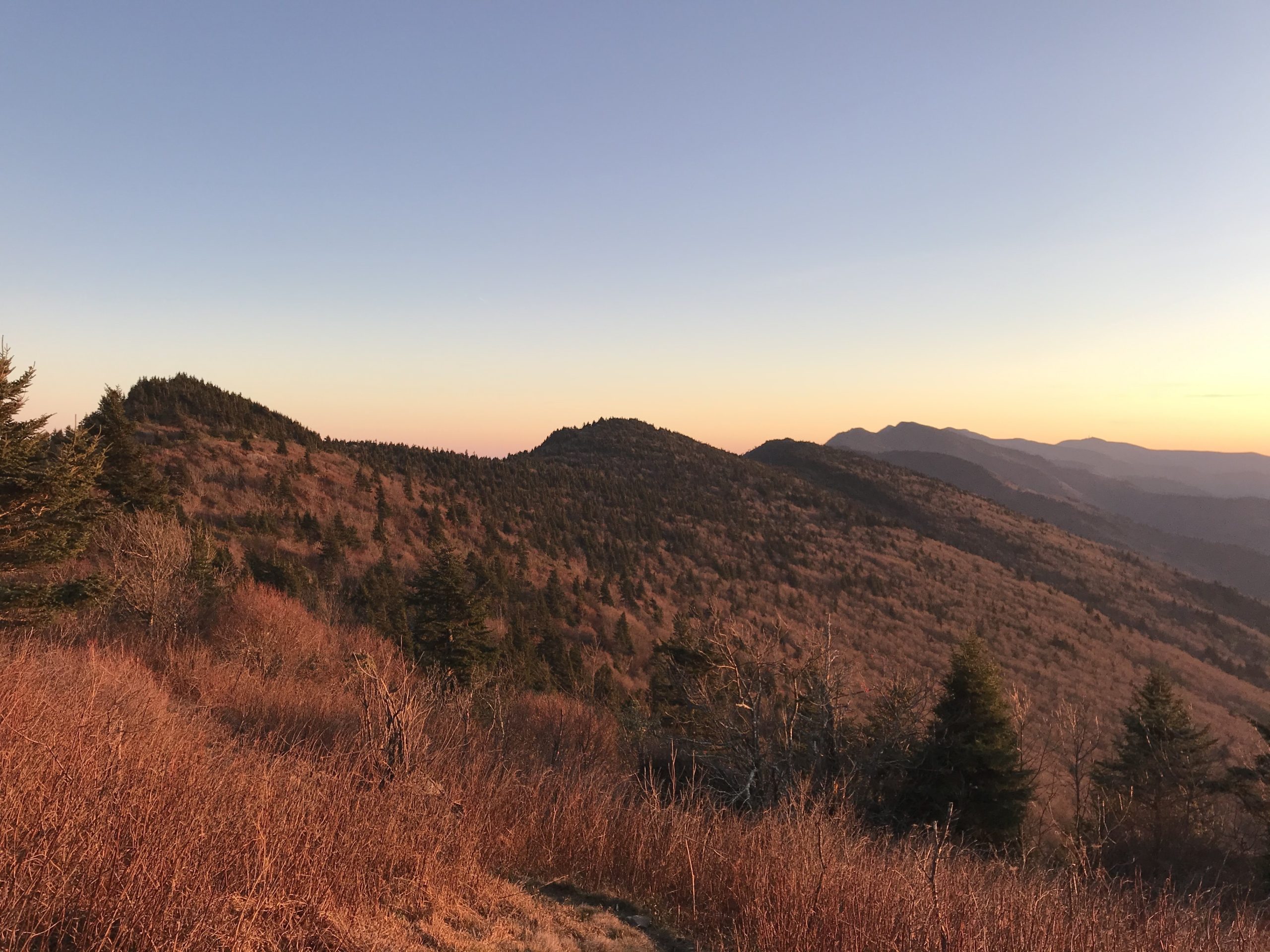 The Future of the Appalachian High Route

Pharr Davis, Blood, and other trail contributors have big plans for the Appalachian High Route. Pharr Davis hopes “it will offer a world-class long-distance trail to folks who don’t have 4-6 months to hike-and highlight the high peaks and biodiversity in the southeast. I hope a lot of locals use it but would be jazzed to see people coming from all over to hike it. ”

The team is working diligently to create hiking maps along with other resources as the trail grows in popularity. For now, a basic outline of the trail can be found on Pharr Davis’s website. There are also social media accounts for the trail (Instagram and Facebook), and a website is in the works. If you find yourself in the Burnsville area this summer, there will be an information meeting for the Appalachian High Route at 6:30 pm on August 4, 2022, at the Yancey County Public Library in Burnsville, NC. 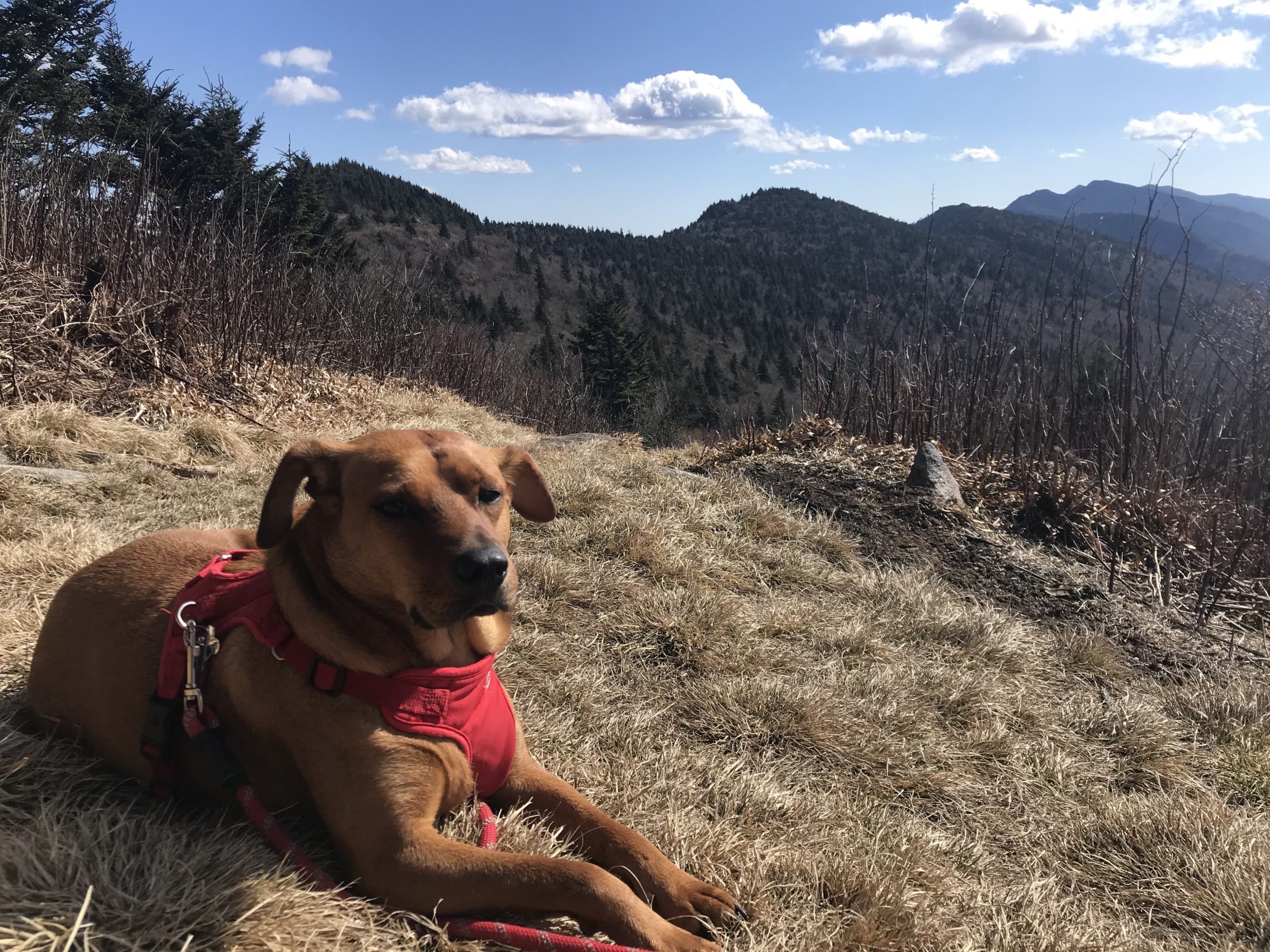 My Race Through the Smokies

Little Feet, Big Dreams: Who I Am and Where I’m Going