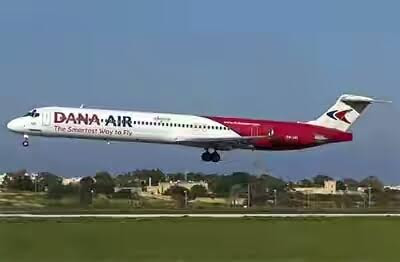 Dana Air Flight 0992 was a scheduled Nigerian domestic passenger flight from Abuja to Lagos, Nigeria. On 3 June 2012, the McDonnell Douglas MD-83 aircraft serving the route suffered a dual-engine failure during its approach to Lagos. It failed to reach its intended destination and crashed onto buildings, killing all 153 people on board and six on the ground. With 159 deaths, it remains as the deadliest commercial airliner crash in Nigerian history since Kano air disaster in 1973.

The Nigerian Accident Investigation Bureau (AIB) concluded that both aircraft’s engines had lost power during the approach to Lagos.

Incorrect assembly had severed the engines’ fuel line, causing fuel to not be delivered to both engines. During the initial sequence of the engine failure, the pilots opted not to declare an emergency until the second engine lost power during the flight’s final approach. Lack of situational awareness and poor decision-making by the pilots eventually caused the aircraft to crash into buildings.

The aircraft was a twin-engined McDonnell Douglas MD-83, registered in Nigeria as 5N-RAM, built in 1990 and first delivered to Alaska Airlines under the registration of N944AS, and operated until the airline retired their MD-80s in 2008.

Flight 0992 was carrying 147 passengers, including 15 foreign nationals from 9 countries. The foreigners were six Chinese nationals, three Americans, two Indians, and one each from Benin, Canada, Germany, France, and Lebanon.

The aircraft was carrying 6 crew members, including an American captain, an Indian First Officer, an Indonesian flight engineer and three Nigerian flight attendants.

The captain was 55-year-old Peter Waxtan. He had a total flying experience of 18,116 hours, with 7,466 hours on the MD-83. He was a captain for Spirit Airlines from 1997 to 2009. He was also reported to have flown for Falcon Air Express, a charter airline in Miami. The captain was hired by Dana Air on 14 March 2012. He began flying line training operations under the supervision of a training captain on 26 April 2012 after completing ground school and simulator training. He held several ratings, including Airbus A320, McDonnell Douglas DC-9, Fokker F-27, and Saab 340.

The first officer, Mahendra Singh Rathore, was a 34-year-old with a total flying experience of 1,143 hours, with 808 hours on the MD-83. He was previously employed at Dana Air as the director of cabin service before he was hired as a pilot in January 2011.

Flight 0992 was a flight from Nigerian capital of Abuja to the country’s largest city of Lagos, operated with a McDonnell Douglas MD-83. It departed Abuja at 14:58 local time with 153 passengers and crews, consisting of 147 passengers and 6 crew members, and 26,000 lbs of fuel. The wind was calm and the weather was in great condition.

The flight was piloted by Captain Peter Waxtan (55) and First Officer Mahendra Singh Rathore (34), with Rathore as the pilot flying (PF). It was a busy flight and at the time the aircraft was on the returning leg of the second flight from Abuja.

Approximately seventeen minutes after taking off from Abuja, the crew of Flight 0992 noticed an abnormality on the left engine. The engine somehow didn’t manage to produce enough thrust despite the throttle setting that had been put by the pilots.

Captain Waxtan then questioned First Officer Rathore if one of the ground crews had tampered with the panel near the aircraft’s rear door, and subsequently stated that “the guy” had problems and was enraged at them. Prior to the flight’s departure to Abuja, both flight crews had some sort of feud by refusing the ground engineers ‘request to use the rear door for passengers’ embarkation, thus the Captain’s suspicion on the matter.

Nevertheless, the crew decided to continue the flight to Lagos. They didn’t think that the problem was a serious matter and hence concluded that they didn’t need to divert the aircraft to the nearest airport, even though there were differences in the EPR value on the engines and the lack of response from the left engine, which was operating at idle power despite its throttle setting. They then contacted Lagos ATC to request a descent clearance. During the entire conversation, there was not a single mention on the inoperative left engine. They also didn’t check the emergency checklist for inoperative engine.

As the flight was cleared to descent, Captain Waxtan ordered First Officer Rathore to increase the aircraft’s rate of descent, but First Officer Rathore declined, stating that the gradual descent was far more effective in maintaining their height. Flight 0992 was then cleared by Lagos for an approach to Runway 18L. Again, the crew didn’t issue a distress call or even mention the malfunctioning left engine. The flight continued to approach Lagos. As it was confirmed that there was no response from the left engine, Captain Waxtan took over the control from First Officer Rathore and became the pilot flying. The right engine, at the time, was still operational and thus the crew thought that it was still safe to continue the flight to Lagos. Captain Waxtan could be heard saying “Okay, this one is good for us so far.”

The aircraft became nearer to Lagos and the crew became increasingly concerned as they started to receive a series of heading and altitude radar vectors from Lagos ATC. They shifted through multiple checklists for the approach to Lagos. However, they didn’t read the single-engine landing checklist that had been provided for them. Their altitude was a bit higher than usual at the time and Captain Waxtan decided to increase the rate of descent to correct it.

Captain Waxtan then tried to decrease the rate of descent by increasing the throttle setting of the right engine. To his surprise, the right engine didn’t respond to his input. Both engines finally had completely failed to generate the commanded thrust. Realizing the gravity of the situation, the crew finally declared an emergency when they were 11 nautical miles (20 km) from the airport.

However, even with the present emergency, the crew somehow still didn’t even try to read the checklist for such emergency. They immediately attempted to contact control tower at 118.1 MHz for landing directions but was unsuccessful. The flaps were then set to 28 and Captain Waxtan asked the flight purser to prepare for landing. At the time, there was no indication that the situation was not under control.

A few minutes later, the “altitude” warning sounded, and Captain Waxtan stated that he had seen the runway. The flaps were selected up and the crew selected the landing gears up. As both engines had lost its ability to generate the commanded thrust, Captain Waxtan concluded that “we just lost everything, we lost an engine, I lost both engines”. During the next 25 seconds, the captain requested everything that could help recover thrust including “relight”, “ignition override”, “just anything” to be given to him. With the lack of thrust output from the engines, the aircraft continued to lose its speed and altitude.

The aircraft lost its thrust power and became nearer to the ground. The crew then applied stabilizer trim several times as they tried to avoid obstacles and buildings ahead of them, but their attempts were useless. The aircraft lost altitude rapidly and the altitude warning sounded until the end of the recording.

The MD-83 crashed in the densely-populated Iju-Ishaga neighborhood near the airport. It first impacted a two-storey Power Holding Company of Nigeria building with its right wing and later struck multiple trees and three other buildings. The aircraft then exploded and burst into flames.

Fire then spread throughout the neighborhood. One of the impacted buildings was an uncompleted building that had been storing flammable liquids in preparation for its intended use as a press building, increasing the fire. Many residents initially mistook the explosion that had been caused by the crash as an attack by the Nigerian terrorist group Boko Haram.

The crash scene became chaotic, with Nigeria’s The Sun reporting that thousands of Lagos residents attempted to approach the site. Crowds attempted to bring water hoses to the site while soldiers attempted to disperse onlookers with punches and rubber whips. The onlookers then threw stones at the soldiers in retaliation.

Water for firefighting was scarce for several hours due to the city’s shortage of fire trucks, and civilians attempted to fight the fire by hand with water from plastic buckets. Water trucks commandeered from nearby construction projects had difficulties reaching the site due to the narrow roads.

As the authorities managed to douse the flames, the fire had completely destroyed every structures of the aircraft, with the tail being the only remaining structure. No survivors were found at the crash site. All 153 passengers and crew members had perished.

At least 6 people on the ground were also killed by the crash. Forensic analysis eventually revealed that 27 people on board the aircraft, all of whom were seated at the back, initially had killed the crash. Some residents reported that they had tried to escape from the burning wreckage and locals had attempted to open the emergency exit to rescue them. However, they immediately succumbed to the smokes and the ensuing explosions.