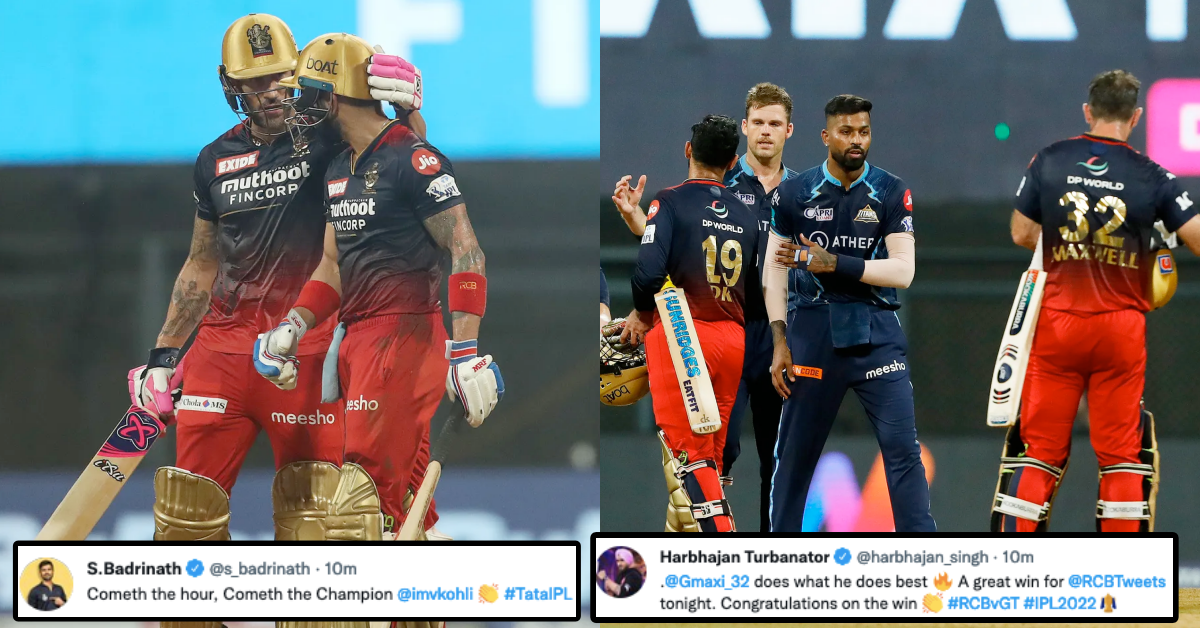 The 67th match of the Indian Premier League (IPL 2022) was played between Faf du Plessis-led Royal Challengers Bangalore (RCB) and Hardik Pandya-led Gujarat Titans (GT) at the Wankhede Stadium in Mumbai on Thursday, May 19.

In the powerplay, Gujarat Titans were able to score 38/2 as they lost the wickets of Shubman Gill for 1 and Matthew Wade for 16. Notably, Gill was dismissed by Josh Hazlewood and Wade was declared out LBW in a controversial DRS decision.

Star performer Wriddhiman Saha, who once again batted brilliantly, got run out on the 3rd ball of the 9th over and he was able to score 31 runs off 22 balls, including 4 fours and 1 six.

After that, Hardik Pandya and David Miller had an amazing 61 runs partnership off 47 balls, before the latter was dismissed for 34 on the second ball of the 17th over by leg-spinner Wanindu Hasaranga.

Faf du Plessis and Virat Kohli provided an amazing start to Royal Challengers Bangalore in the run-chase against Gujarat Titans as they were able to score 55/0 in the powerplay.

In the end, Rashid Khan dismissed both the RCB openers but it was not enough for Gujarat Titans to win the match as Glenn Maxwell and Dinesh Karthik took the Royal Challengers Bangalore past the finish line.

.@Gmaxi_32 does what he does best 🔥 A great win for @RCBTweets tonight. Congratulations on the win 👏 #RCBvGT #IPL2022

This is a solid win for RCB against table topper. If they qualify they will carry this momentum into the playoffs.

Whoa, the next couple of days are gonna be something #TATAIPL2022. Playoff determination going down to the penultimate game.

Finally, a very fine innings by #ViratKohli in #IPL and that too in a run chase! Well done champion and well done @RCBTweets . #GTvRCB #RPSwing

It’s not often that the last day of the league phase has no bearing on the qualification…kuch scenario toh bacha hi hota hai. Not this time. The #DCvMI game will decide the fourth team to qualify…

Finally, a very fine innings by #ViratKohli in #IPL and that too in a run chase! Well done champion and well done @RCBTweets . #GTvRCB #RPSwing

Well played 👏#RCB. Not the ideal way for us to finish our league stage. However, we move on. Now it’s playoffs time! #AavaDe #RCBvGT

When you are dead in the competition but you decide who will go in play offs #IPL #ViratKohli pic.twitter.com/jlG8MIAI76

RCB fans after winning yet another must win game to stay alive #RCBvGT #RCBvGT pic.twitter.com/rtTVNArMyO

Without that HP over, this match would’ve gotten dicey for RCB.

Third Timing lowest rating for any of Virat Kohli’s T20 half-centuries – but you could also say his timing was impeccable. Felt like a proper *thing*, that innings

Good thing about this Bangalore win is now we will get to watch RCB fans supporting MI. 😂 #IPL

It would have been fun if Gujarat also had something to lose. #IPL

KING FOR A REASON, KING OF ALL SEASONS.

Really happy to see our champ Virat Kohli is back in his ferocious form. #RCBvGT #TATAIPL pic.twitter.com/leaQ9kzwzq

73 off 54 in a must win match 🔥
He’s back 😭❤️!
The King is back 😍
Well played champ @KeepOfficial 🙌❤️#ViratKohli pic.twitter.com/jVFYfDDivy

When the lights are the brightest, Pressure is highest, Crowds are the loudest, the best will arrive, the strongest will survive, the greatest will thrive 🙌🏻❤️

Get All Cricket match prediction and fantasy Tips – CLICK HERE